Burano is one of the small islands in the Venetian lagoon, well known for its colored houses. According to Wikipedia a homeowner will send a request to the local authorities, who will answer denoting the specific color which is permitted for the relevant house. I wonder if Giuseppe Toselli (1920-2002) has followed this procedure.

Born in Burano, Toselli first was a candy seller, which may have given him the nickname Bepi Suá (sweet Bepi?). Later -in the 1940's- he became a film operator in the local Cinema Favin.

When the cinema had to close, Toselli became the owner of the projection equipment. He was a great lover of films and arranged open air film screenings for children in front of his house

In the 1960s, following a passion he already had when young, Toselli began decorating the facade of his house with geometric patterns in various bright colours. A special characteristic is that Toselli often changed the layout of the design, often doing so daily.

It is possible the interior has been decorated too, but I did not come along credible reports about this.

Although Toselli's creative way of painting differs completely from the usual monochromatic color scheme in Burano, I couldn't trace any reports indicating that the authorities objected to his way of acting. Perhaps they appreciated the project as a contribution to the promotion of tourism, which it certainly has done.   . 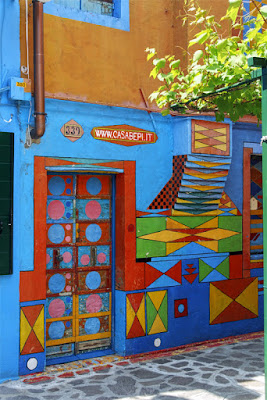 The grandfather of one of the authors of the video at the bottom of this post, Stefano Regazzo, lived near Bepi s house. In order to save the decorations, the family decided to buy the house. The decorations, which had since become somewhat neglected, were repainted as they had appeared in 1985.

Casa Bepi Suá
via al Gottolo 339
Burano, Venezia, Veneto, Italy
can be seen from the street
Posted by henk van es at 10:33 AM