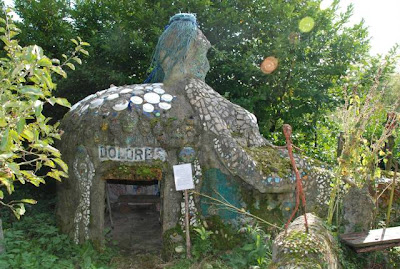 this picture and the next two (october 2008) courtesy of Francis Verpoorte
"Dolores", an accessible sculpted structure of
a mourning woman in the Garden of Stones


The small community of Ellezelles in Walloon Picardy in Belgium is well known from the folklore and traditions it upholds. Since the 1970's this reputation has been highly promoted by a very colorful inhabitant of the region: Jacques Vandewattyne (1932-1994), who is also known as Watkyne.

Born in Ellezelles Vandewattyne  attended primary school in his hometown, then trained to become a teacher, a profession he practiced from 1952 on

Interested in visual arts, but autodidact he made paintings, sculptures and ceramics, and meanwhile he continued his career in teaching and in 1968 he became  teacher at a high school.

In 1958 he had his first local exposition. From that year on he would regularly exhibit his visual art throughout various places in Belgium, using Watkyne as his artist name. 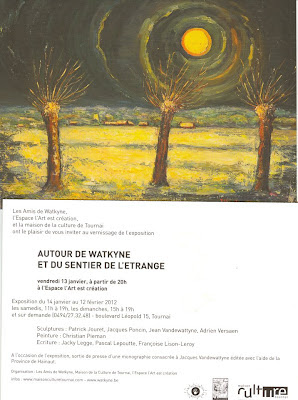 As an autodidact artist Watkyne felt strongly connected to folk art. Reflecting on this he published in 1974 a manifesto in which he praised the value of popular traditions and described the folk artist's role as ".... a privileged witness, who feels better than others the heartbeat of his region and its inhabitants. It's back to basics, back to the simple things of life" and also: "One should guard one's roots, know where one comes from. Enhancing the region, making it known, being available to come to its defense, participating in the rescue of witnesses of the past: this is a fine field for an artist"

In his paintings he depicted landscapes of the region, often embedded in moonlight and with a mysterious atmosphere. He also dealt with themes from folk legends.

Vandewattyne has been initiator of a festival called Witches Sabbath, based on a burning of witches in the 17th century, currently a crowded happening in June, when Ellezelles is flowing full with people dressed as witches and devils.

He has also was active in promoting a market of old crafts, planting a maypole and saving traditional architecture.

A rather specific project, inaugurated in 1984, is the "trail of strangeness" (le sentier de l'étrange). It is a walking tour of some 6 km around Ellezelles along dozens of sculptures crafted by Vandewattyne which portray characters and events from folklore.

The garden of stones

In 1984 Jacques Vandewattyne could buy a property adjacent to his own house in Wodecq (Ellezelles). 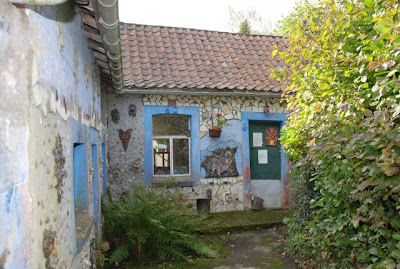 It has a small house he used as a studio, and a large garden, which he transformed into an art environment. 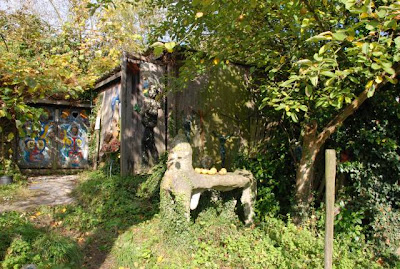 An admirer of Facteur Cheval and Picassiette, Vandewattyne felt inspired to decorate the garden with a variety of structures and sculptures, like the Dolores (as in the first picture), a monument to humanity, an animal with seven heads, a devil and many more items. 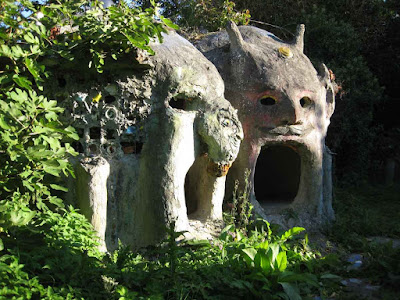 The exterior walls of the studio have been decorated with mosaics. Various fossils, rocks and stones, collected by Vandewattyne throughout his life, have been used to decorate the structures and sculptures which are displayed in the garden.

The garden itself has a jungle-like nature. All in all, the place is a large size assembly of creative eruption and expression. 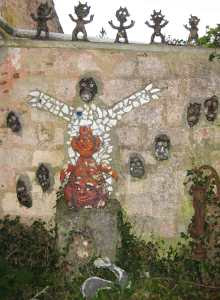 Already during Vandewattyne's life, this art environment has been a private affair. It is still extant and is being cared for by his son and daughter-in-law, The garden is not open for the public, except on some very special occasions.

However, since spring 2015 Vandewattyne's house can be rented as a holiday home. It generally has been left as it was when the artist lived there and one is staying in the gite amidst some of Vandewattyne's artworks. 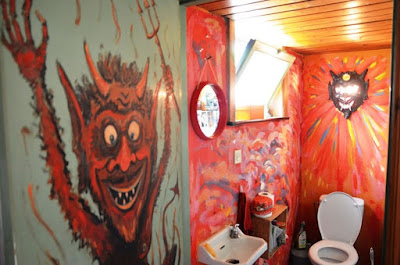 Guests of the holiday home can visit the garden, which meanwhile is rather overgrown, while some creations are gradually deteriorating.

Documentation/more pictures
* Wikipedia ( in french)
* Vandewattyne's personal website
* Pictures (2008) of the garden of stones
* Lauren Klarfeld, "Outsider environments: a walk into the strange garden of Mr Watkyne in Ellezelles" (september 2018), on Itinari website

Email ThisBlogThis!Share to TwitterShare to FacebookShare to Pinterest
Labels: garden with sculptures from concrete and mosaic, sculpture trail