The Carrer de Grau in the Sant Andreu quarter of Barcelona still has the atmosphere of past times, with its small houses and front gardens facing a street that has no car traffic.

The residents organize these gardens in various ways and one of them did this in a very special, creative manner.

Isidre Castells (1920-2005) at age seventeen was enlisted in the army to take part in the Spanish civil war. Struck by typhus, been imprisoned in a concentration camp and having lost his father and mother, his youth was troublesome and he had to find a way to face life after the war.

He got a job in a factory, worked in the weekends as a home painter, and settled in the Sant Andreu quarter of Barcelona. When in the 1980s the factory went bankrupt, Castells got an early retirement.

Not liking idly hanging around, he began working in the front garden, installing some concrete elements to curb the growth of weeds. This was the start, around 1985, of a project that he would continue for some twenty years.

With the format of big tiles in mind, Castells made two-dimensional replicas of well known architecture in Catalonia, like the Sagrada Familia and Montserrat.

All together, in the course of the years he has constructed some hundred representations of Catalonian monuments, churches, famous buildings, and so on. 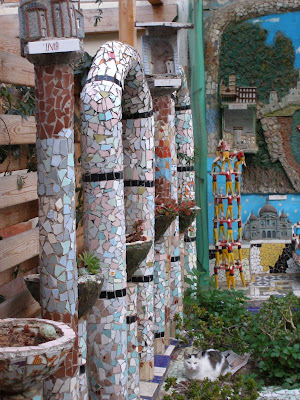 Apart from the replicas on the wall, which give the site a museum-like character, the garden itself has been embellished with mosaic- and shell-decorated structures, like flowerpots, pillars and arcs.

People in Barcelona would be reminded of Gaudi. 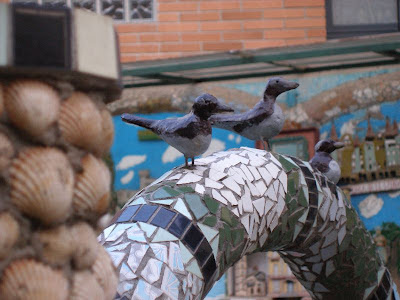 Castells has been making sculptures too, one of these is a black, mosaic-decorated representation of his beloved dog, as in next picture. 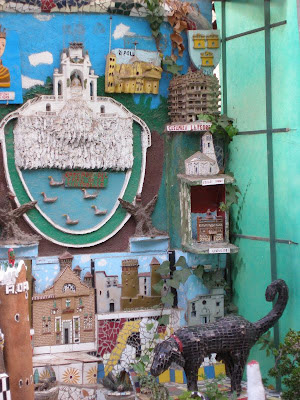 After Isidre Castells died in 2005, his widow Rosa Anglada, would maintain the garden and when she became to old (in 2018 she was at age 92) Josep Castells took care of the site, as reported in the journal El Periódico (see documentation)
Situation in 2021 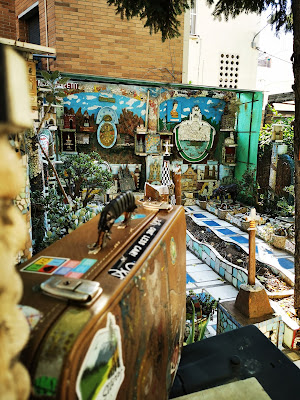 The picture above, made in October 2021 by Tiramisu Bootfighter, who traveled through Spain in the context of his project La Valise, Galerie Ambulante, show that the site at that time was still in good condition
Documentation
* a website promoting the quarter of Sant Andreu has pictures of the garden and a text about Castells
* a series of photos (December 2013) by Raija Kallioinen on Facebook
* entry (November 2014) on Amaijak's weblog Mi Mundo, with a series of pictures
* article (January 2018) in local journal El Periódico
Video
* scenes of the site (2012) on the Barcelona trip video by Serflac (YouTube, starts at 19.46, cannot be embedded here)

Email ThisBlogThis!Share to TwitterShare to FacebookShare to Pinterest
Labels: garden with sculptures from concrete and mosaic, mosaic garden