Dudweiler, a community of some 20.000 inhabitants near Saarbrücken in Germany, has an art environment named Burg Schönewolf. This singular architecture was created by Heinz Schönewolf (1936?- September 11, 2019) and his wife Hildegard.

It all began when part of the hilly area behind the house was excavated to make room for a garage. The resulting slope had to be shored by a stone wall, which was constructed by using a load of boulders remaining from a terminated local tramway.

The sight of this retaining wall with its old stones, probably produced associations with old castles, which are not uncommon in this part of Germany. This may have triggered Heinz Schönewolf to transform that wall into a castle. It has been reported that he from childhood on dreamed of owning a castle,

Like so many other constructors of singular architecture the couple just began, and nowadays (2012), almost 40 years years later, visitors can admire a fairytale castle with towers and tilts, some 15 meters wide and 15 meters high (49x49 ft).

Due to the vertical wall  that started it all, the creation has a somewhat décor-like two-dimensional appearance, but nevertheless the three-storey building has indoor stairs and rooms, like it also has a small pond and an aquarium. 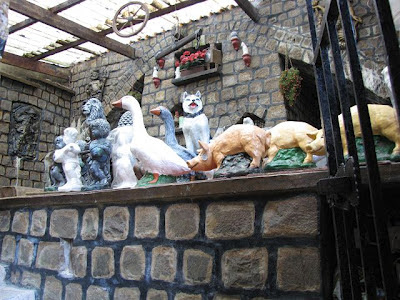 Apart from building the castle, Heinz Schönewolf also has been active in making small sculptures from concrete, which -mainly depicting animals- decorate the exterior of the castle.

Friends of mine who visited the site in June 2016 reported that the Schönewolf couple was still daily active in enhancing their singular architecture. They welcome music performances, wedding parties and comparable activities to the castle grounds.

However, three years later it was reported that Heinz Schönewolf passed away on September 11, 2019