The decorated exterior of a house as in above picture, can be seen in Viviez, an otherwise rather commonplace community of some 1400 inhabitants in a former mining area north of the city of Toulouse, France.

Guy Brunet (born in Viviez, 1945) doesn't need an inspiring exterior habitat:  he is most happy inside his own house, which he has converted into a memorial and homage to the heydays of Hollywood movie, from the 1930's to the 1960's.

His father exploited cinema's, the Caméo in Viviez, later the Plaza in Cagnac-les-Mines, until in 1963 the curtain dropped when television supplanted small local cinemas.

Young Guy, who assisted his father in projecting movies, became fascinated by the world of cinema, to which he gave expression by collecting and documenting material relating to the world of movies, drawing posters and writing film scenario's in his school notebooks.

After the cinema was closed, his parents opened a store of electronics (indeed: selling TV's too). Guy has assisted them for some years and then went from job to job in various industries, but unsuccessful in getting a job in the industry he most loved, the movie world.

Finally he returned to Viviez, where in 1994 he could acquire a house on the avenue Adam Grange.

Included in  an employment scheme, in 1986 Guy Brunet began making cardboard figures of personalities in the movie world. Once he had his own house, the collection would grow and grow.
In 2012 the collection included some 750 items, stored in two rooms on the first floor of the property, men and women occupying separate rooms. 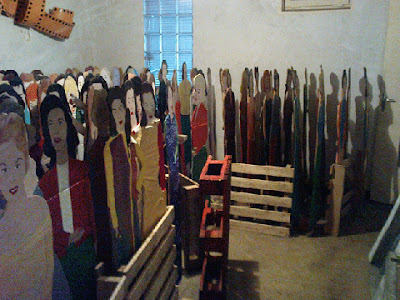 These two-dimensional card board figures, painted in brilliant colors and all of them 1.38 m high, represent a multitude of actors, producers, musicians, TV personalities etc, a large group of more or less famous personalities who form his daily company and who, as it happens, will also appear in video movies Brunet creates himself.

The collection can be considered as a very special art environment. 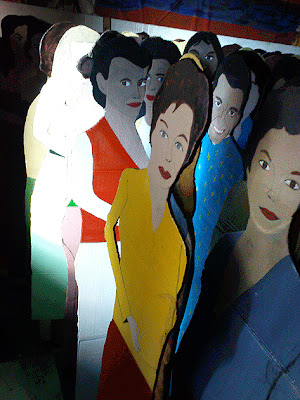 Self made posters and scripts

Already as a youngster, Guy Brunet would write scripts and design posters related to the movie world.

He has made some sixty of these posters, using paper of a large format, on the average 120x80 cm, painting his subjects in bright colors and paying tribute to both classic titles in the American film history in particular and to world famous actors appearing in these films. 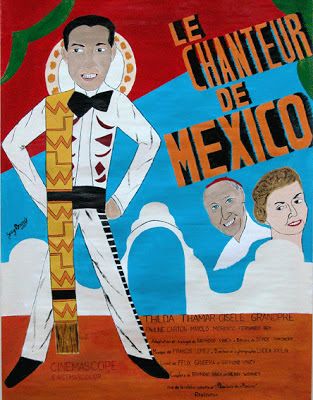 Brunet was inspired by the posters as distributed by the film production companies, but felt free to shape the images in his own way. 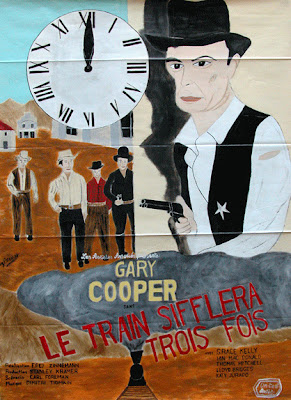 With a video camera Brunet in 2000 began making video films on topics related to the movie world, using his card board figures as actors and acting himself as voice over or actor.

These films, with a length of between one and over three hours, in general have a documentary character. They deal for example with the producer Cecil B. de Mille, the actor Fred Astaire, the history of the music hall or the golden age of the Cannes film festival (a production from 2005 of 3 hrs 50 min).

When Brunet was almost sixty, he began to gain a certain fame when he got a first exposition, a selection of his posters, in Sète in 2002 (Musée International des Arts Modestes),

In October 2012 a large exposition was held in Villefranche sur Saône, near Lyon.

Organized by the association l'Autre Cinéma (the other cinema) the exposition (31/10 - 11/11/2012), apart from posters and other items, included over 200 of his card board figures. As far as I know this was the first time a large selection of these figures was exhibited.

During the exposition, fragments of Brunet's (at that time) latest, not yet finished film, entitled Le monde magique des frères Lumière (The magic world of the Lumière brothers) were presented.

Documentation
Articles
* Website of the association of friends Association Guy Brunet-Paravision
* Article with a variety of pictures (June 2011) in Jean-Michel Chené's weblog
* A large collection of photos (summer 2014) on the weblog les grigris de Sophie, May 2015:
-overview
-various actors
-various posters
* Article in regional journal La Dépêche, February 10, 2003 and October 30, 2012
* Bruno Montpied, articles in his weblog May 1, 2008 and October 25, 2012
* Article by Alexia Jacques-Casanova (May 2016) in Hyperallergic