Castries, a small town of some 5000 inhabitants in the Hérault area in the south of France, is known because of its aqueduct, a 17th century construction of some seven kilometers long to transport water to Castries' inner city castle.

Near the spot where the aqueduct crosses a road, in the outskirts of the town,  a property is located, that has a (nowadays deteriorated) sculpture garden and in addition features very special characteristics in terms of its construction.

Born in Castries, Roger Peridier (1914-2003) became a roofer, who in the 1930s bought a vineyard that he wanted to transform into a garden to grow vegetables.

Such a garden needs water and Peridier, who assumed that deep under ground water would be available, dugged a pit which at a depth of 22 meter produced water indeed.

The excavated sand, in its turn, was used by Peridier as construction material to build a house on the terrain, a building not very deep, but with a long, imaginative facade, balustrades and semicircular windows.

He had received no training as an engineer, but being a handy, practical person, Peridier constructed various devices to water the area where the vegetables were cultivated, like a windmill and a system of underground pipes.


It took him decades to produce and complete these and many other structural modifications of the house, like he dugged out underground corridors, water reservoirs and rooms. And then he also constructed various types of machinery, for example a system to use wind energy avant la lettre. 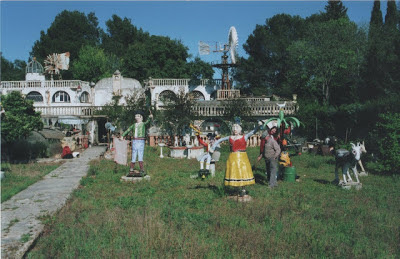 In the 1970s Peridier got time to focus on other activities and he began making sculptures to embellish the front garden of the house.

His sculptures, standing on a concrete base, were constructed by applying concrete to a model from chicken wire and were painted in lively colours. 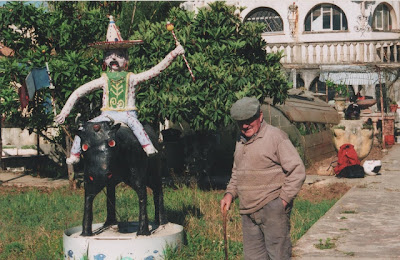 Peridier depicted all kind of animals and persons, inspired by the themes creators of art environments embrace in general, but adding southern French accents as manifested in a toreador and a bull.

Some sculptures have been designed in such a way that parts of them could move.

After Roger Peridier died in 2003, by a difference of opinion among the heirs, garden and house have been left uncared for, and both have deteriorated.


Documentation
* The only source on the internet providing information on Roger Peridier's life and work is the weblog Hérault Insolite, authored by Dominique Clément (post of October 4, 2012).

His post gives a vivid, well illustrated  description of Peridier's creative machinery, constructions and sculptures. I am indebted to this author for his permission to draw upon his research and use some pictures in above post.