This blog up to now just has one post about rock sculptures, namely the one about the sculptures created by Abbé Fouré in the rocks along the Breton coast in France.

Now, here is an entry about a somewhat comparable site: a series of some forty rock sculptures, located in the Bohemian Paradise, the rocky area in the Czech Republic, north west of Prague.

Born in in the small community of Vadin, in the Havlickuv Brod area, Vojtech Kopic (1909-1978) at the age of eight became an orphan and he was educated by an aunt. He didn't enjoy much schooling and from a young age on he would have jobs in agriculture.

In the early 1930s, at work in Rovensko in the Bohemian area, he met Vera Holubova, daughter of a farmer in Kacanovy. They married and in 1932 the couple went to live in the farm in Kacanovy.

Vojtech Kopic had a drive to express himself musically and artistically. He learned to read music and not only played the harmonium at the farm, but also the organ in the local church. 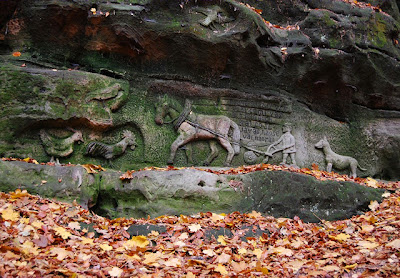 In 1940, in his early thirties, Kopic began a creative project that would keep him active until his death: making sculptures in the rocks in a wooded area near the farm and belonging to its grounds. 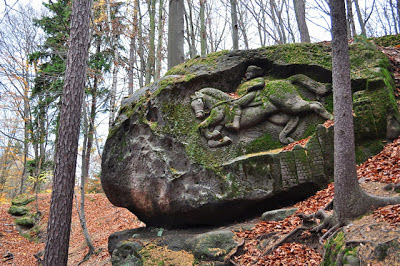 He had no training in making sculptures at all, except that a neighbour, who was a stonemason, told him how to split stones and the like. Using simple utensils, a chisel and a hammer, Kopic has made a series of sculptures and reliefs that express his deep interest in Czech national history. 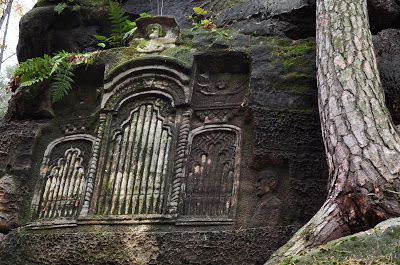 One of his sculptures depicts an organ. It is curious to note that Kopic has portrayed himself adjacent to the organ, on the picture above between the organ and the tree, the artist amidst the famous personalities he portrayed.

All together during some 45 years Kopic has constructed forty sculptural items, depicting heroes from Czech history, saints, scenes from rural life and animals, like a lion, a dog, a deer....

His first creation was a chapel with St Wenceslas, as partly can be seen  in the first picture. 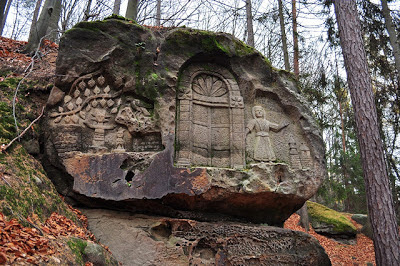 Kopic had to combine these creative activities with his work at the farm, in his time a labor with considerable efforts, like wells for the water supply had to be dug by his own hands and electricity was only first installed in 1962. 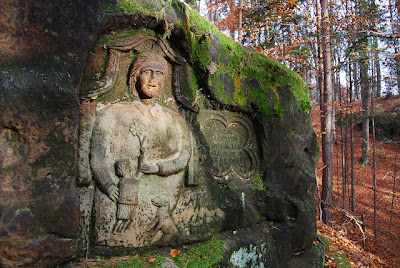 The farm itself, Kopicuv statek, is renowned. Dating from 1787, it has been reconstructed some times and it nowadays is regarded as one of the finest examples of popular timbered architecture in Bohemia. 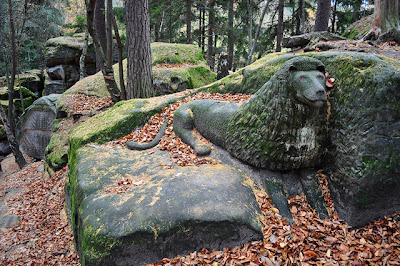 Vojtech Kopic died in 1978, his wife in 1985 and since the farm is inhabited by a younger generation of the family.

Located in in an area that attracts tourists who like nature and wandering around, the rock gallery became a popular site to visit.

Although the internet has no information about any organization of volunteers that takes care of the sculptures, the site remains in good condition. Weather conditions and visits of interested people so far do not seem to have had much influence on the creations.
The photo below, made in September 2022 by Tiramisu Bootfighter (La Valise, Galerie Ambulante) during a trip along art environments in Eastern Europe, gives an impression of the situation in 2022. 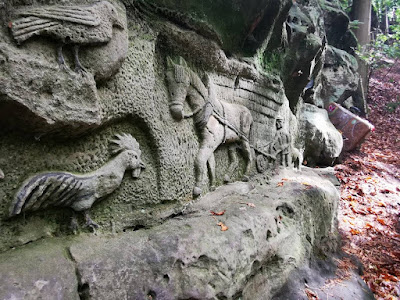 * Photos and documentation about Kopic on the website Tales of the Czech Forests by by documentary photographer Vladmir Pomortzeff, who between 2016 and 2018 visited places in the Czech Republic  with sculptures carved into the rocks
* Weblog of Radek Folprecht (April 2010) with a map, pictures of the farm and of the sculptures (in Czech)
* Website by Michal Konvicka about Kacanovy, with the story of Vojtech Kopic (in Czech)
* Pavel Konečný and Šimon Kadlčák, Atlas spontánního umění (Atlas of spontaneous art), Prague, 2016 (ISBN 978-80-906599-1-9). p. 79-83
Video