Located in Rothéneuf, on the coastal road that runs from St. Malo to Cancalé in Brittany, France, the site Les rochers sculptés is a well known classic.

This art environment was created by Adolphe-Julien Fouré (1839-1910), who was a priest and generally is known as Abbé Fouré.

Born in Saint-Thual,  Fouré as a young man studied at some seminaries, was ordained as a priest in 1863 and worked in a number of communities in Brittany, among other in Paimpont where he was rector for some years..

In october 1893, in his fifties, he settled in the small community of Rothéneuf, on the north coast of Brittany, not far from St Malo, where he rented a simple cabin.

The legend says that he, after a stroke which made him deaf-mute, no longer could fulfill his clerical duties and so decided to retire as a priest. Recent research by the Association of friends however demonstrates that Fouré was relieved from his duties by his superiors and had to leave after they did not appreciate a firm position the priest had taken in a local conflict.

In 1894 Fouré began making sculptures, both creations from stone, displayed on the exterior facade of the cabin and wooden creations, displayed in its courtyard and interior.

So his house became kind of a museum and since in the region tourism had begun to develop, the site attracted tourists.

Fouré became known as the hermit of Rothéneuf, although one can wonder if he led a lonely life.

He would be present at the premises, selling postcards which showed him and his creations. The revenue went to the local poor. During the priest's lifetime some 400 different postcards have been made.


Currently the priest is mostly known because of the around three hundred sculptures he carved into the rocks along Rothéneuf's coast.

These sculptures represent folklorist, religious and historical themes, for example the Virgin Mary with nations at her feet, or impersonations of all kind of people related to the past of Brittany (among whom, but not exclusively -as legend says- a family that in the 16th century happened to live in that area and had a reputation of bandits behavior and piracy).

Abbé Fouré stopped carving rocks in 1907, but he continued making wooden sculptures until his death on February 10, 1910.

After he died his belongings were auctioned. The furniture was bought by various people and some items of this furniture nowadays are still available in art galleries. The wooden sculptures did not attract so much interest. Most items have been bought en bloc by the owner of the cabin, who had the purpose to let them stay in situ.

However, the cabin/museum has disappeared, and so have almost all wooden sculptures¹. This probably happened in the period during world war II (around 1944?) when the French north-west coast was a military zone (to prevent an eventual allied invasion) where the civilian population was deployed.

Currently the sculptures in the rocks still exist, but the site hasn't a protected status and the creations gradually become affected by the weather and the visitors. Originally painted, meanwhile they have lost all color.

The Abbé kept kind of a guest book in which visitors or he himself could write remarks and/or make drawings. This Livre d'or (golden book) was donated by the family to the Association of friends of the oeuvre of Abbé Fouré.

Here is a picture of the book's cover, from a series made available by the Association of friends for publication on the weblog of Sophie Lepetit 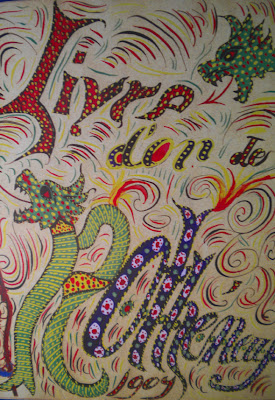 More pictures on the weblog lesgrigrisdesophie of February 4, 2012.

Presided by Joëlle Jouneau the association Les amis de l'oeuvre de l'Abbé Fouré, founded in 2010, documents Fouré's life and works, organizes expositions and meetings, and promotes the preservation of the site. They have a website (in French).

In the summer of 2013 Joëlle Jouneau was interviewed about the activities of the association. The text of this interview is in my collection of OEE-texts.

Exposition in Paimpont in 2012

In February and March 2012 the association of friends organised an exposition in Paimpont, Brittany, entitled Life and works of Abbé Fouré. 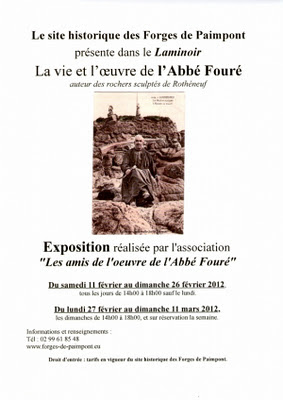 Paimpont is special in Fouré's life. After in 1863 he was ordained as a priest, he became in 1865 the chaplain of the Chapel of St Eloi des Forges in this community, which is located in the Brocéliande area, known for the forges (furnaces) that at that time for some 200 years had been producing cast iron.

But in the 1860s economic tide had become unfavorable for the exploitation of these forges and the owners decided to gradually close them. Legend says that Fouré traveled to England, where the owners resided, to advocate the survival of the furnaces, but this story probably is apocryphal.

Publication of a booklet about Fouré in May 2013

By means of crowdfunding the Association collected money to publish a booklet about Fouré. Written by Joëlle Jouneau and entitled l'Ermite de Rothéneuf, this publication (published in May 2013) offers a biography and a description and assessment, based on the latest insights, of his creative and other activities.

Fouré's life and work for long time have been surrounded by frills and legends. Only lately an attempt is made to figure out the truth and this book contributes to this.

Just some examples:
* it has been related that Fouré, when he was the rector of Paimpont, traveled to England to ask the owners of the local forges to refrain from the phased closure of these forges (cf Noguette, 1919); recent research in English archives up to now has not confirmed this;
* it also has been related, that Fouré in 1893 had to terminate his activities as a priest because he had become deaf and suffered from a stroke; in this respect the archives reveal that the priest in a local dispute took position against the authorities, after which he was dismissed from his office by the leadership of the church.
The booklet also has a review, as accurate as possible given the available knowledge, of Fouré's creations, both the ones in and around his house and the ones carved in the rocks. Since there still are many questions, this is an ongoing project.

The booklet, 12 x 17.5 cm, 64 pages, richly illustrated with old postcards, can be ordered at Librairie La Procure,
Opening of an interpretation center (2021)
After ten years of preparation, the association of friends of Fouré opened a Centre d'Interprétation de l'Ermite de Rothéneuf on 9 July 2021. Located in Saint Malo, this center can organize exhibitions and conferences, and can arrange walks and virtual tours on the sculpted rocks.
The center has a page on Facebook.
Documentation

Stories from former times
* Noguette, La vie de l'Ermite de Rothéneuf, St. Malo, 1919. This brochure by Eugène Herpin, 1850-1942, has been republished on Bruno Montpied's weblog. A translation into english in OEE texts.
* Another early 20th century text is R. Brooks Popham, The hermit of Rothéneuf, 1912, also republished in OEE texts.
* Also from the early 20th century, first published in 1919, republished in 2010 the Guide du Musée describing the wooden sculptures. This new edition has an introduction by Bruno Montpied and is illustrated with items from the author's collection of rather rare old postcards that show these sculptures. The document is published in the very first edition of the new french art periodical l'Or aux 13 isles

Websites
* Article on SPACES website, with pictures (made in 1988) by Seymour Rosen
* Website of the Association of Friends
* Website Habitants-paysagistes (Lille Art Museum, from march 2018 on) has an entry with a variety of pictures by Francis David (1983-1991) and l'Aracine ((1900-1945) and documentary panels from René Escard's documentation)


* Life and work of Abbé Fouré, Les forges de Paimpont, febr/march 2012 (organised by the Association of friends of the oeuvre of Abbé Fouré), continued in the Chapel of St Vincent in the Normand community of Saint Coulomb, east of Saint Malo (april 8 - june 30, 2012) 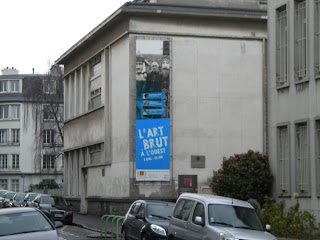 
* In 2013, at the occasion of the manifestation l'Art brut à l'Ouest in Brest, Brittany, with the cooperation of the Association of Friends, an exposition about Abbé Fouré, "as you have never seen him before" (april until end of june 2013).


note
¹ in december 2010 it was made public that an inhabitant of St. Malo owns a wooden sculpture made by Abbé Fouré, a present to her mother (see Jean/Michel Chesné's weblog, 19-1-2011)


open for the public
a private firm exploits the site, asking an entrance fee
at low tide the site can be reached freely (by those familiar with the surroundings)

More pictures
* Some panoramic postcards on Jean-Michel Chesné's weblog (19-1-2011)  These special pictures can be enlarged and give a good impression of  the vastness of the site.

* Life and work of Abbé Fouré, Les forges de Paimpont, February/March 2012 (organised by the Association of friends of the oeuvre of Abbé Fouré), continued in the Chapel of St Vincent in the Normand community of Saint Coulomb, east of Saint Malo (April 8 - June 30, 2012)

* In 2013, at the occasion of the manifestation l'Art brut à l'Ouest in Brest, Brittany, with the cooperation of the Association of Friends, an exposition about Abbé Fouré, "as you have never seen him before" (April until end of June 2013).

note
¹ in December 2010 it was made public that an inhabitant of St. Malo owns a wooden sculpture made by Abbé Fouré, a present to her mother (see Jean/Michel Chesné's weblog, 19-1-2011)
first published December 2008, last revised January 2022)
Adolphe-Julien Fouré

a private firm exploits the site, asking an entrance fee
at low tide the site can be reached freely (by those familiar with the surroundings)
Posted by henk van es at 6:55 PM