The Shell Garden, a site once beloved by locals and holidaymakers, located in the community of Southbourne on England's south coast, doesn't exist anymore.

The man who made this site, George Howard (1898-1986), had a job as a coal miner in South Wales and later served in the marine, a job that led him to sail many seas in the world.

When retired in the 1940s, he and his wife settled  in Southbourne in a house on Overcliff Drive facing the sea.

Howard's lifelong passion for shells activated him to collect them, a hobby probably facilitated by his many travels.

In 1948 he decided to transform the front garden of his house into a shell decorated art environment. 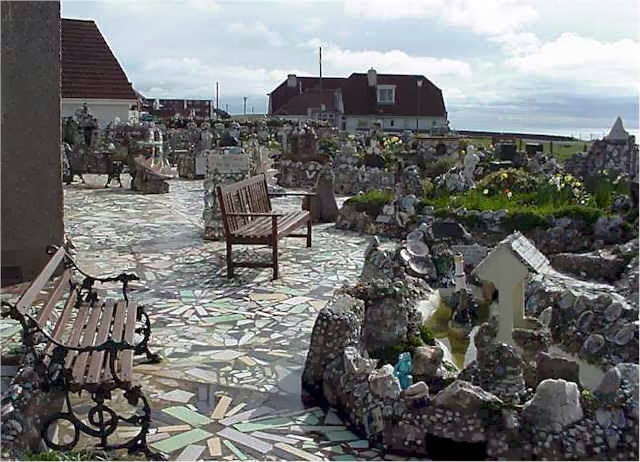 For almost twenty years Howard has been active in creating the Shell Garden.

Located on a street along the seaside, the site could easily be entered by passers-by. As above picture shows, the garden was provided with benches which allowed visitors to quietly enjoy views of the garden and the sea.

The picture also shows that Howard paved the ground with mosaics, apparently made by using slices of monochromatic tiles. 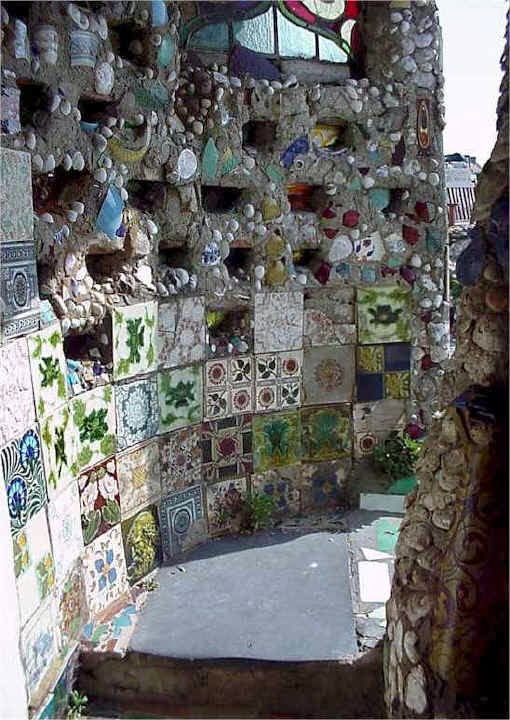 The vertical constructions in the garden, such as the wall (of a small grotto) pictured above, also were decorated, in this instance by adorned tiles and inlays of shells. 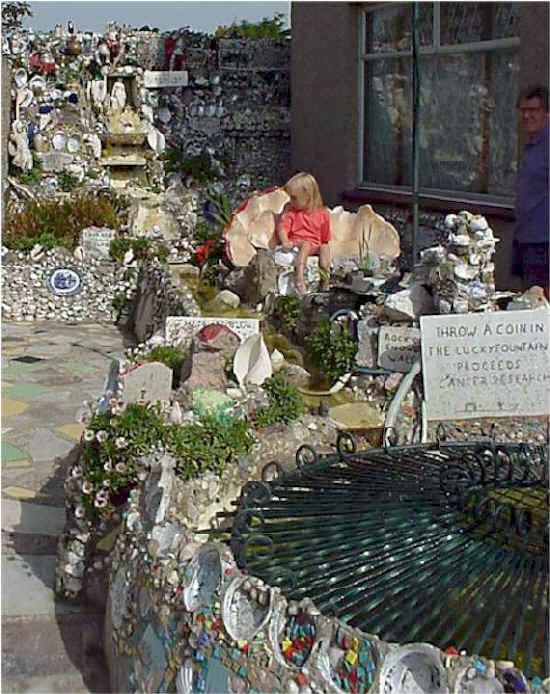 The garden had some special features. One attraction was a very large shell, transported from the Philippines, so giant it could seat a child, which would enable making nice photo-shoots of course. "Please take a photo of your wee one sitting in shell", Howard noticed on a plaque (wee one is Irish and means small one).

Other plaques informed the visitors that this was "the worlds most unique shell garden" or invited them to throw some money in a fountain (the collected money would be donated to charitable institutions, such as the local hospital).

The website Cream Tea Club has a page with pictures of a number of the plaques Howard had placed in the garden, some with proverbs, others with wisdom and advice for everyday use. Take a look, because "to see much is to learn much", a phrase coined by.....? 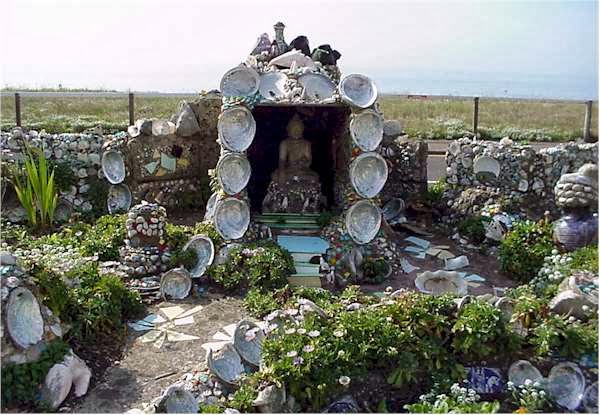 Other features of the garden were shrines and two grotto's, a large and a small one, all abundantly decorated on the outside and the inside, occasionally with very big shells, but mainly with smaller ones, probably collected on nearby beaches.

The site ultimately has been demolished

After Howard and his wife had died (in 1986, respectively 1989), their son and his wife continued taking care of the garden.

However, end 2000, early 2001 the family made the decision to remove the site. as they said "with pain in their hearts". Their main argument was, that the garden had been vandalized so many times.

On February 5th 2001 the site has been cleared away.

* The shell garden on the Cream Tea Club website, with an informative review and many pictures and on another page pictures and reviews of texts on plaques made by Howard
Video
* A video, shot in 1992 by Bogardesbar (YouTube, 1"15', uploaded 2012)