Underground excavated voids may have various functions, such as storing food or providing safe shelter. This underground cellar in the Czech community of Satov, near the border with Austria, probably has been dugged out from the perspective of sociability, since through the years it has been a wine bar.

Because of it's decorated interior the site has some reputation, mainly on touristic websites.

Maxmillian Appeltauer (1904-1972), born in Austria and resident of Satov, as a young man in 1934 began decorating the interior of this underground cellar on his free sundays, a project he has continued for over thirty years.

On the sandstone walls he created a multitude of frescoes in a naive style, depicting landscapes, historical events, various characters from history and fairy tales. 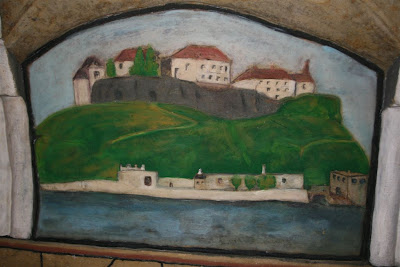 The cellar, some 12 meters (39.3 ft) below surface, has a main corridor of some 25 meters (82 ft) long, complemented with some five smaller corridors.

Electricity was only provided in 1965, so Appeltauer has been painting all these years in darkness, only getting light by some candles attached to his hat.

When he was in the army during WWII he got wounded and lost control over one arm, however, after the war Appeltauer, although disabled, continued his decorative project.


Czech website Druid Mysteries has the story that some of the frescoes in the course of time have been repainted, in accordance with socio-political developments, like the two gardeners in next picture originally were soldiers 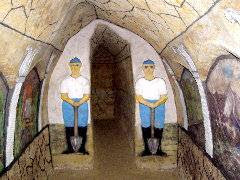 and, what originally was a painting depicting the Führer was transformed into a scene of a family welcoming the blessings of socialism.

Singlehandedly decorated caves and dug-out voids are rather rare in Europe. Chesné's Garden Grotto (France) is not dugged out and actually is a structure. Dumoulin's Grotte (Switzerland) has no decorations.
There are some collectively frescoe decorated and otherwise embellished caves, like the Jesuit Caves (Netherlands), the cave at Denezé sur Doué (France) and the Wieliczka Saltmines (Poland). But a cave with decorations made by one person, as the one in Satov, to my knowledge is unique.

Actual situation
Currently the site is mainly a tourist attraction, that can be vsisited in summer. The couple that welcomes visitors and entertains the guided tours also takes care that the frescoes stay in good condition.