Already in Iceland this site is considered as located in a remote part in the west of the country, so from a mainland perspective it may rank as the westernmost art environment in Europe, and a rather remote one too.

Samuel Jónsson was born in 1884 in Arnarfjörður in the Westfjords region in Iceland. His father died when Samuel was four years old and then he lived with his mother in various places in the region. After his mother died in 1916, he married Salomé Samúelsdóttir with whom he had three children who all died at a young age.

In 1947 the couple settled in Brautarholt in Selárdalur. Soon after the move Jónsson's wife died and he stayed alone in the house in the Selárdalur Valley,

From young manhood Jónsson had artistic ambitions which he expressed by making paintings. Restricted by the hard labor at the farm, he couldn't fully devote himself to creative activities.

However when in 1949 he became 65 years old he received a pension and then he finally could realise his dream of spending all his time to making art. 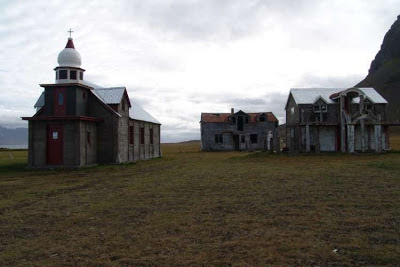 One may suppose that in the early 1950's Jónsson began making the artworks that ultimately would result in the emergence of an art environment, which eventually would include a sculpture garden and two built structures: a chapel and a museum with Jónsson's paintings and other small works.

The story related with the chapel says that Jónsson had made a painting that could serve as an altar piece, which he wanted to donate to the local church at the occasion of its centennial in 1961. However, his offer was rejected.

So to provide an adaquate place for this altar piece, Jónsson constructed his own chapel (on the picture above the building to the left, with the small tower). It took him some three years to construct this building, which was completed in 1965.

Since the farm had no electricity, Jónsson could not  use drilling or sawing machines; he had to do all construction work by hand.

The other building he constructed is depicted in the picture below. It is a gallery/museum where Jónsson would expose his paintings and smaller creations like small replicas of famous buildings. 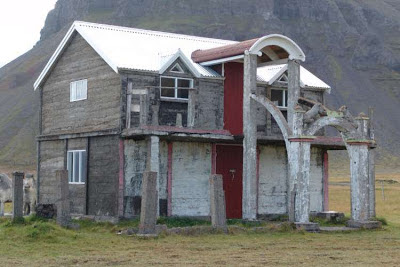 Annex to these buildings Jónsson created a sculpture garden.

Its chef d´oeuvre is a replica of the Alhambra Lions Fountain as in the first picture, but there are some other sculptures too, like personalities (the famous Icelandic explorer Leifr Eriksson), seals, seahorses, a duck with ducklings.

Jónsson made these sculptures from concrete. He bought the cement in a neighbouring village and carried it home. On a nearby beach he collected the sand needed to mix with the cement. 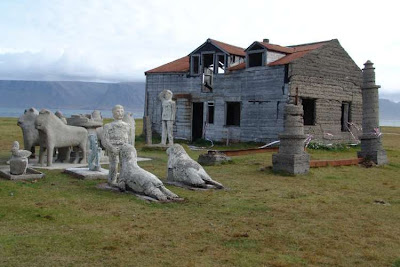 In the last years of his life, Jónsson struggled with impaired vision, until in 1968 he became completely blind. He was admitted to a nursing home, where he died in 1969.

After he had passed away there was no one to take care of the site. In that period the valley probably already experienced a decline in population, given that in 2010 the last farmer left the region that once had some fifteen farms.

During Jónsson's life his work received little or no publicity. It was not until 1976, seven years after his death, that Hannibal Valdimarsson published a first article about the site. In 1981, film director Ómar Ragnarsson made a documentary about Jónsson's life and work, interviewing various people who had known him.

In 1998 an association was formed to preserve the site. With help of the Department of Agriculture, owner of the lands, a renovation project was designed which from 2005 on has been implemented. In the following years summer camps were organised where volunteers have been active in renovating the buildings.

The idea is to transform the site into an artistic complex, with a visitor centre, exposition facilities, apartments and studios where artists in residence can stay and work.

Around 2017 the website of the Samuel Jónsson Art Museum appeared which reports about the progress of the project and collects as much information as possible about Jónsson and his art environment.

Documentation, more pictures
* Leaflet of the Félag um listasafn Samúels jónssonar í selárdal (Association of Art Museum Samuel Jonsson Selárdalur)
* Website of the Samuel Jónsson Art Museum
* Various pictures of Selárdalur, including a number of the site  on Flickriver
* Post (september 2012) on the weblog I'd rather be in Iceland
* John Rogers (text) and Timothée Lambrecq (photos),  "A road trip to the weird & wonderful Samuel Jonnsoon art museum", article (undated) on touristic website Grapevine (Iceland)
* A video  by Heim 713 (You Tube, 3'30", uploaded may 2011) (the propped up wall in the video is what has been left of the original farmhouse; the plan is to rebuild it)
.