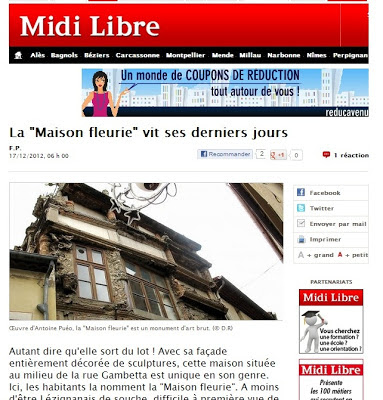 The Midi Libre, a journal from southern France, on December 17, 2012 had an article¹ saying that La "Maison Fleurie" vit ses derniers jours" (the flowered house has its last days).

A plan to widen the street where the house is situated, implies that it has to be demolished.

About the decorated house in the Rue Gambetta in Lézignan-Corbières, a narrow street indeed, not much has been published in writing or on the internet. but it must have been depicted on a large number of postcards.

She says her grandfather, born in Spain, came to France at a rather young age (maybe around 1900 or so, my guess), to become trained as a mason.

Puéo became the owner of the house in the rue Gambetta in the early 1940's and soon he began reconstructing it, adding additional floors, replacing balusters and decorating the facade with mosaics and shells, and with sculptures he made himself.

Through the years the house also has been embellished with natural plants and flowers, which induced the name Maison fleurie.

Marie-José Puig for many years lived in the house and eventually she became its owner. In 2001 she sold the property to the municipality.


In September 2016 the house still existed, as demonstrated by photographs made by Sophie Lepetit as published on her weblog. The internet has no information about any later developments.
Documentation
* Article in Midi Libre newspaper
* Weblog by Jean-Michel Chesné with a picture postcard of the facade
* Weblog De l´art improbable aux jardins insolites dans l´Aude et les environs, November 2013, with pictures from the family
* Weblog by Sophie Lepetit (march 2017) with links to documentation and pictures of the house in september 2016