Vir is a small community of some 750 inhabitants in the Bohemian-Moravian highlands of the Czech Republic, attractive because of its location in beautiful surroundings and surprising because of a unique artistic installation.

To please his children, Vincent Navratil, in the 1940s in the vicinity of his house began constructing an installation with movable wooden characters, depicted two-dimensional and mainly in side view, showing scenes from daily life, like carpenters and  blacksmiths at work, dancers, people drinking, trapeze artists, and so on.

The machinery could be set in motion by a paddle wheel in the nearby flowing creek, and when water supply was low, Navratil would activate it manually. In wintertime the structure would be safely stored in a shed. 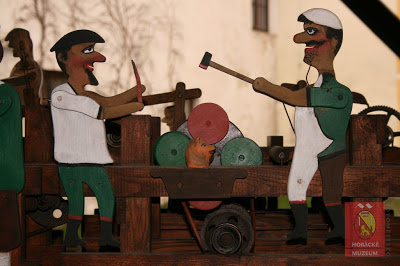 With a job as a handyman at the local textile factory, Navratil could easily acquire surplus machinery parts to build up the installation.

Begun modestly, the number of characters in the course of the years grew, also because Vincent's son Adolf joined his father in making these characters, and eventually, in the 1970s, the installation included some seventy characters. 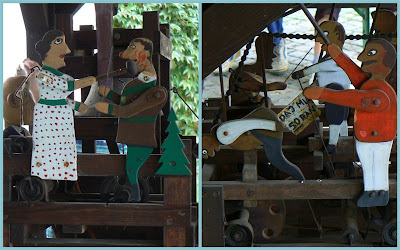 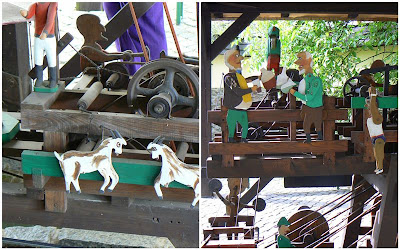 Donated to the Horácké Museum

A replica in Vir

The community of Vir, however, has arranged that a replica of the installation was made, which in 2007 was placed on a spot along the Bystnce stream that boards the village.