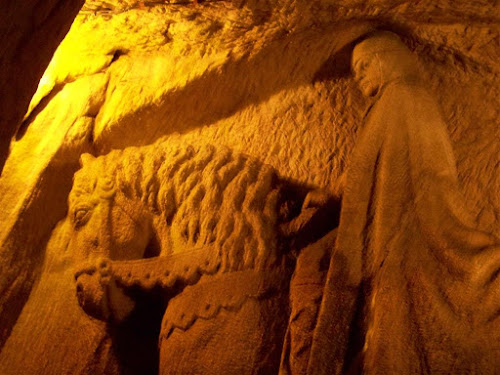 colored pictures (2012) courtesy
of Patrik Frýbort (Frypat), from his weblog

The story of autodidact sculptor Stanislav Rolinek is tragic, because he died at such a young age, and it is fascinating, because of his dedication to making creations in the short period given him (1927-1930)

Currently his Cave of the Blanik knights, an art environment in Rudka in the Czech Republic, still can be visited.

Born in Boritov, Czech Republic, Stanislav Rolinek (1902-1931) after primary school got a job as an upholsterer in a furniture factory. His father had died when he was one year old and the family could not afford prolonged education, although Stanislav already when young showed artistic talent. He had a poor health and as a young man, in 1924, he had to be treated for tuberculosis.

When young he probably made paintings, but sculpting became his artistic passion. In 1927 -using very simple utensils- he made a sculpture of a girl's head in an abandoned sandstone quarry at the foot of a hill in the outskirts of the community.

Derided by people who worked in the fields around and being a timid person, Rolinek decided to make his next sculpture in a secluded place, more uphill. This was a spot on private property, so to avoid being caught, he often worked at night. 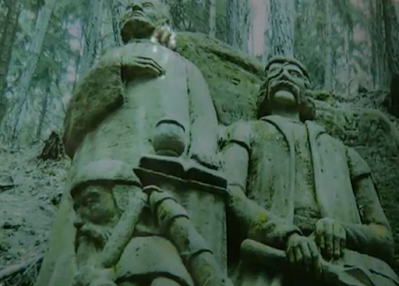 This sculpture was an ensemble, 4x4x2,5 m (13x13x8.2 ft) that depicted Jan Hus (internationally also known as Johannes Hus) and two companions. In 1918 Czechoslovakia had become independent after centuries of Habsburg rule, and Hus was the figurehead of the young nation, which in the 1920's entailed considerable tensions with catholic citizens and the Vatican. 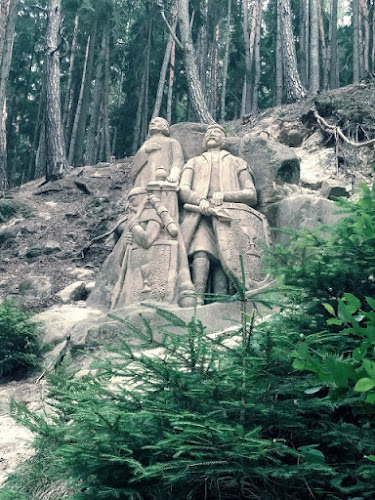 So once news about the Hussite sculpture group began to spread and the creation got publicity in local and regional papers, it attained great renown, in any case in relation with nationalist feelings, but without doubt also because of its artistic expressiveness. One of its admirers, Frantisek Burian, mayor of Kunstat, near Rudka, would become Rolinek's patron.

A statue of the president

Burian asked Rolinek to make a sculpture of president Thomas Masaryk, which should be erected on a plot of land Burian owned. The idea was that the statue would be ready in October 1928, to be unveiled at the occasion of the tenth anniversary of the republic. So Rolinek had just some eight months to make the statue. 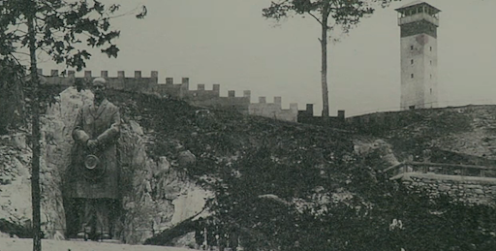 the statue of Masaryk,
in the background Burian's watchtower
still from Czech tv series  "Na Ceste" (On the road)

A lot of people were present at its inauguration. 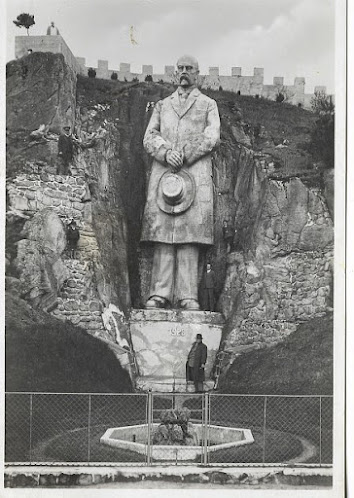 another picture of the statue of Masaryk
by an unknown photographer on website blanensky.denik

After this Rolinek had to be hospitalized, to be once more treated because of his tuberculosis. When he could return to his hometown, in 1929, at the feet of the Masaryk statue he made a sculpture of a big lion, some 4 meters (13.1 ft) large, looking over its left shoulder, watching  the president as if protecting him.

Probably, Rolinek never had seen a lion in reality, 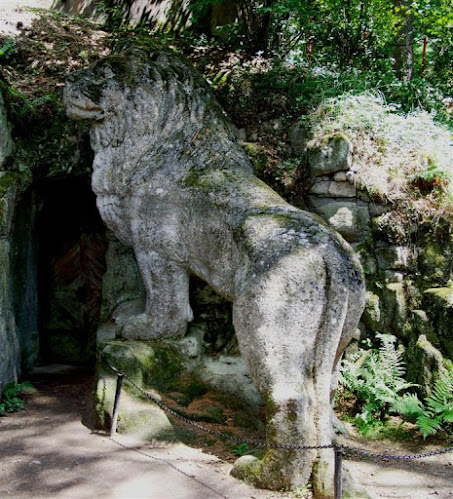 Burian offered Rolinek to pay a study at the Art Academy in Prague. The young man was admitted indeed (autumn 1929) and followed courses. However, because of his illness he could not continue the academy and in 1930 he returned home, where Burian meanwhile had arranged that a cave of some 100 m length was dugged out in the sandstone rocks near Masaryk's statue.

The cave of the Blanik knights

In this cave Rolinek made an ensemble of some 18 sculptures, which depict the legend of an army of knights, asleep in the interior of the Blanik mountain, who would awake and, commanded by Wenceslas, would come to the help of the Czech people when in extreme danger. 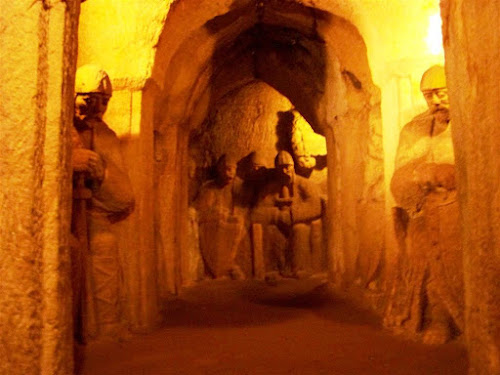 Rolinek probably was supported by some assistants who did preparatory work and maybe also did some sculptures of knights, which has not been documented very well.


In any case Rolinek has made the most important ones, like the 3.5 m (11.4 ft)  high sculpture of St. Wenceslas on a horse, which took him four months to complete (autumn 1930). 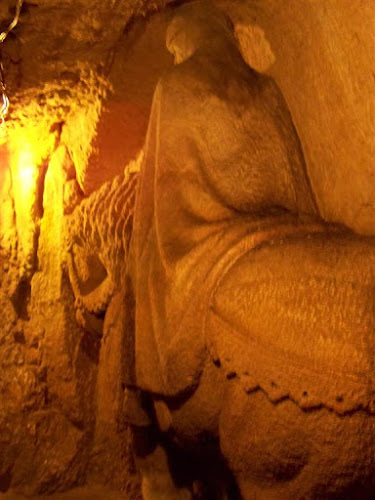 It would be interesting to know more about the relationship between Burian and Rolinek. Burian as mayor may have wanted to promote the community and attract tourism and may have had nationalist ideals, while Rolinek, although patriotic, may have had more artistic ambitions. This note is not the place to discuss this in detail, and probably relevant documents are lacking.

Demolishment of the Masaryk statue

During world war II  the German occupier ordered the demolishment of the Masaryk statue. Burian has tried to save it by having it divided into parts and hiding these, but this plan was betrayed and the sculpture has been demolished. Only the feet are still extant. 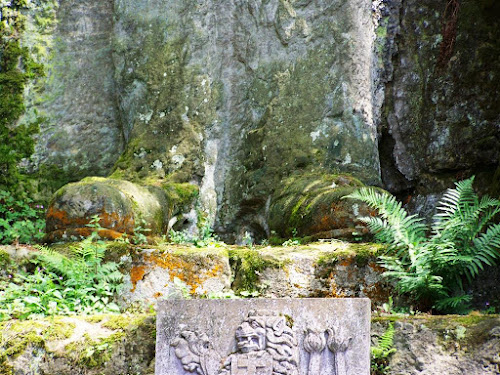 After Burian died (1943) the site became neglected, but in 1989 a granddaughter took the initiative to revitalise it. Currently, the site which from old has a watch tower, has been expanded with a park and an area where Czech artists can expose their work. 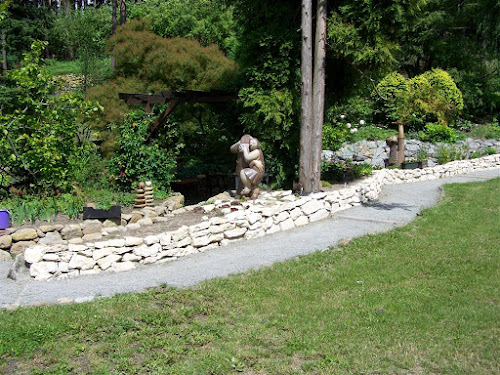 As far as I understand the Hussite sculpture group currently is still extant; it can be visited by making a walk in Rudka's environment.

* Photos and documentation about Rolinek on the website Tales of the Czech Forests by documentary photographer Vladmir Pomortzeff, who visited places in the Czech Republic between 2016 and 2018 with sculptures carved into the rocks
* Andrea Svitáková, Stanislav Rolínek a sacharstviv priodé (doctoral thesis, available in PDF on the internet), Brno, 2010 (an academic study, relating Rolinek's life and discussing his creations)
* Pavel Konečný & Šimon Kadlčák, Atlas spontánního umění (Atlas of spontaneous art), Prague, 2016 (ISBN 978-80-906599-1-9). p. 170-191
* Website of the Cave
* Article (August 12, 2018) by Radoslav Labarzewski  on his weblog Znalezienie
Videos
* Video (2011) of Czech tv series "Na Ceste"(On the road), about Boskovic (scenes of the Cave start at10'.08")
* Video by MaRudChannel "The Cave of the Blanik Knights" (5'04", July 2019, YouTube)