Biskupice is a village of less than 300 inhabitants in the district Třebíč (region Vysočina) in the Czech Republic.

One of its former inhabitants, Frantiska Blechová (1911-2001), has become known because from around 1970 on she transformed the garden in front of her house into a fairytale art environment.

Made from concrete some forty sculptures populate the garden. One can see musicians, gnomes, princes and princesses, all kinds of common people and all kinds of animals. such as giraffes, zebras, lions, frogs, elephants, all items colorful painted and provided with hats and/or attributes suited to the depicted personality.

Frantiska Blechová used to dress some of the sculptures with appropriate clothing, depending upon the season.

Frantiska Blechová was born in Biskupice and after leaving school she worked in the fields. She got married, her husband was a mason, and the couple got some nine children. Around 1970, when she was around age sixty, she began creating the sculptures.

She also decorated the facade and the interior walls of the house with large scale paintings and she designed and constructed the tombstone for her grave on the local graveyard. 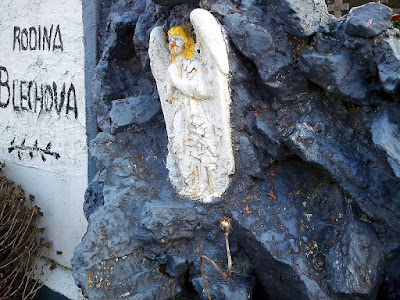 The picture above (September 2012) shows a detail of this creation, made in Blechová's own manner: a structure from all sorts of stones, decorated with angels and turtledoves and painted in bright white, ocher and purple colors. Meanwhile this tombstone has been replaced by one that is more common in the eyes of the bereaved.

The house has been sold

In 2013, a number of years after Frantiska Blechová died, the property has been sold. The new owner, Jan Bierhanzl, bought it with the intention to restore the sculptures

This has been done in the years 2014-2015 by the professional artist Aleš Novák (Academy of arts and crafts UMPRUM, Prague).

After the renovation a group of friends of this art environment has repainted the sculptures in a naive style, according to Blechová's approach. The house itself also needs the construction of a water pipeline and other repairs, which are scheduled for the coming period.

On may 14, 2016 the garden was officially and festively reopened.