Situated both in Poland and in Belarus, intersected by a national frontier, the Bialowieze Forest is the last remnant of the big forest that once covered the European Plain, stretching from the Pyrenees Mountains in the west to the Ural Mountains in the east.

At the outer edge of the part of the forest situated in Belarus, in Belorussian named Belovezhskaya Pushcha, a farm included a folk art museum named Успаміны Бацькаўшчыны (Memories of the Fatherland).

Born in a family of farmers in the community of Pruzhany, Nicolai Tarasyuk ¹ (1932-2015) already at a young age began to work at the farm. World War II restricted his childhood education and brought traumatic events to the area, such as the compulsory eviction of (Polish) citizens,who were locked up in camps or were forced to migrate to eastern parts of Russia.

This fate has not affected the Tarasyuk family. Nicolai all his life has been living on the farm. He married in 1953, had two daughters and a son who died early. 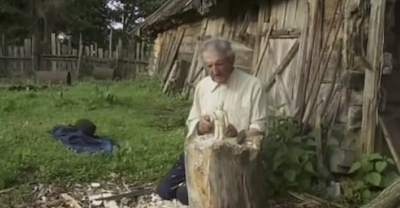 He got fame as a folk artist by making sculptures from wood, in general small items of some 20 to 30 cm (8 - 12 inches) which depict all kinds of people in all kinds of situations or show various social activities by persons grouped together in anecdotal situations. 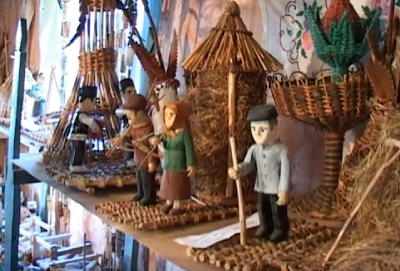 Making sculptures for over forty years, Tarasyuk has created thousands of "wooden people", colorful and naturalistic painted, equipped with appropriate attributes, grouped into a huge amount of small-scale scenes. 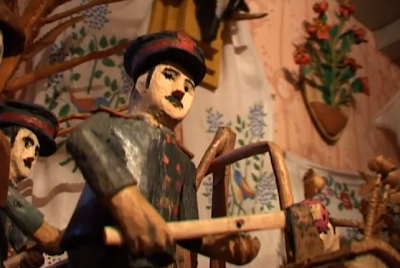 In 1994 Tarasyuk built an annex to the farm, which he transformed into a museum named Memories of the Fatherland. It houses some 300 items. 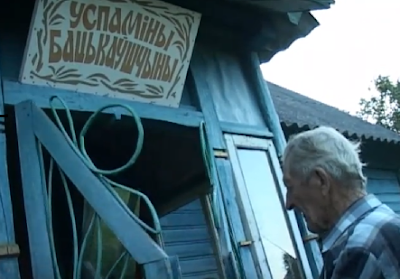 His collection of wooden people grew and grew and ultimately the garden around the farm and the museum was dotted with Tarasyuk's small scale creations. 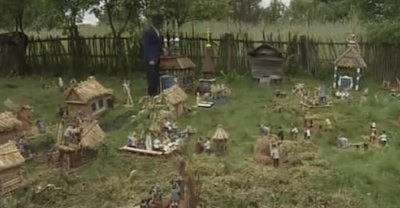 The site became an art environment with ultimately some 30.000 small items ..... 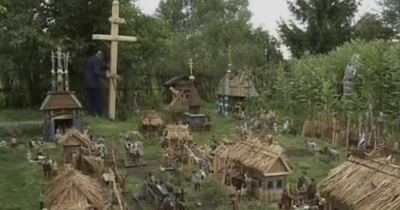 Tarasyuk's wife died in 2006 and since he lived alone on the farm. The outlying area around was depopulating. When for example Tarasyuk's neighbor, also a farmer, died in 2007, his farm stayed uninhibited.

To celebrate his 80th birthday, Tarasyuk was honored with an exposition in the Museum of Modern Art in Minsk, the capital of Belarus (Paradise Lost, August 7-18, 2013). Already in 1987 he had earned a gold medal in Moscow at the Folk Art Festival.

A memorial was placed near his home in May 2015.
Sculptures by Nicolai Tarasyuk were acquired by the National Museum of History and Culture, the Brest Regional Museum of Local Lore, the Motolsk Museum of Popular Arts and the Pruzhanski Palatsyk Museum.
Documentation
* Article on website Okcbrest, with a series of pictures of Tarasyuk s artwork


note
¹ I learned about Tarasyuk through Bruno Montpied, who on his weblog announced the display of Viktor Asliuk's film in Paris (March 2013)