The decorated garden presented in this post doesn't exist anymore and its author has got somewhat into oblivion.

In any case, the internet doesn't have much information about the site and it's creator, which is unfortunate, because -given the few pictures available- this art environment in my opinion was of great stature.

Born in the Morvan area in a family of farmers, François Portrat (1884-1976), after studying in Paris and getting married, had a drugstore in the small community of Arnay-le-Duc in the Burgundy region, France.

Divorced, in 1928 he left with his two daughters for Nice, maybe once more running a shop. Later he would  move to the Paris region.

After World War II, in his early sixties and probably being retired, Portrat settled in Champjean, a hameau (hamlet) belonging to the community of Brannay, north west of Sens in the northern part of Burgundy. 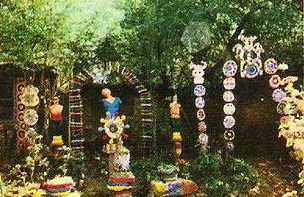 In 1947, when Portrat was at age 63, he began decorating house and garden, in this way giving expression to an artistic drive he  may have had since childhood, but didn't realize earlier.

As far as I understand he first completely decorated the house and then began embellishing the garden, making sculptures from concrete which depicted famous french personalities like the emperor Napoleon, politicians like Pompidou and Gerard d'Estaing and celebrities like Brigitte Bardot. 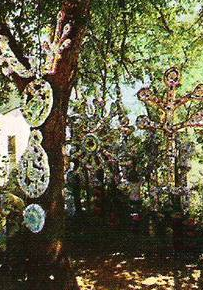 He also embellished the garden with various structures and hundreds of medallions, attached to the trees or added to tree- or totem-like mosaic decorated constructions.

These medallions could show photographs of people or other representations, contained in frames decorated with mosaic from broken plates and pieces of plate glass. 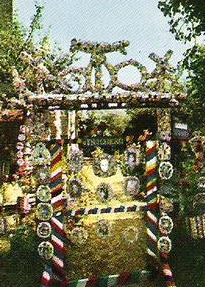 The garden with its large number of sparkling elements must have made a shining impression.

Bernard Lassus, the French writer about imaginary gardens and art environments, has characterized the site as a garden with "arbres de lumière" (trees of light) ¹. Since I have not found a particular name for Portrat's site, I used this description in the title of this post. 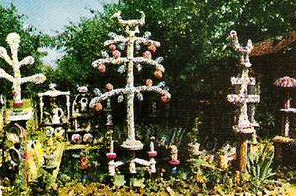 Portrat died in March 1976, two years before Paris had the exposition Les singuliers de l'art in the Musée de l'art moderne de la ville de Paris, the first exposition in France that introduced makers of art environments to the general public, with Portrat among those exhibited.

Some years after Portrat's death the site was demolished.

Parts of the art environment have been saved and have been added to the collections of the Lausanne Collection de l'Art Brut, Switzerland and the Fabuloserie in Dicy, France.

* Article on the website of the Collection 'd Art Brut, Lausanne
* Pictures and brief overview on the Art Insolite website