France's westernmost city, Brest in the spring of 2013 had a manifestation entitled l'Art Brut à l'Ouest (Art Brut in the West).

Besides various lectures, film screenings and theater performances, there were expositions featuring the creative work of Abbé Fouré and Pierre Jaïn (in Breton: Per Jaïn. 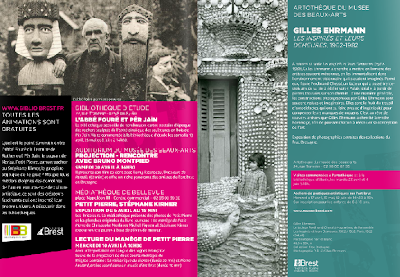 This is a good opportunity to pay attention in this blog to the photographer, whose photo book, published in 1962, marked French developments in the 1950s with regard to art brut artists and environments

Born in Metz, Gilles Ehrmann (1928-2005), after WWII studied decorative arts in Paris, started a theater group and ventured making a movie, to subsequently turn to photography, making portraits of Picasso and other French artists with a big high-quality camera.

Through his relationship with artistic circles, including the surrealists,  he may have been put on the track of people who were or had been active in making art brut creations, a topic of interest that in the 1950s in France only just began to develop.

In any case in 1956 Ehrmann decided to travel the country to portray these people and/or their creations, like the Palais Idéal of facteur Cheval, the Rochers Sculptés by Abbé Fouré or the Maison Picassiette by Raymond Isidore.

This adventure resulted in the book published in 1962 entitled Les inspirés et leurs demeures (The inspired and their abodes), with portraits of Gaston Chaissac, Fréderic Séron, Hyppolite Massé and Joseph Marmin and images of the Palais Idéal, the Rochers Sculptés and the Bomarzo gardens in Italy. 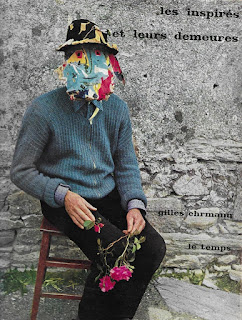 Although fellow photographers such as Robert Doisneau in the 1950s also made pictures of art brut artists and their constructions (naming them bâtisseurs chimériques, fanciful builders), Ehrmann's 1962 publication, with an introduction by André Breton, can be seen as the first coherent presentation in book form that introduced the general public in France to a phenomenon that before that time was rather unknown.

The book has become a collectors item, occasionally available antiquarian.

In 1958 Ehrmann became connected to the French illustrated monthly Réalités, a magazine that -like other magazines- in the 1950s and 1960s, was important in informing the general public about social and cultural developments before this role partially was taken up by television.

Documentation/pictures
* Article in Wikipedia
* Website of the Centre Pompidou documenting Ehrmann's work, with titles and pictures