Begun in August 2010 with a new website, followed in November 2011 by a book and also manifesting itself by various expositions, the Italian Costruttori di Babele research project is proceeding steadily.

With the Casa Museo Pietro Moschini as a center point, the blog will report about irregular art and art environments in Tuscia..

On May 11, 2013 this museum has been officially inaugurated and that weekend there have been a number of other events as well, as shown in the following poster. 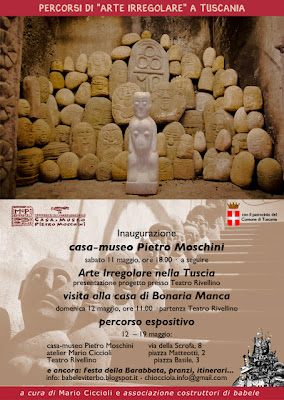