Venice is a city full of art that attracts a lot of tourists. It also once had an art environment that was loved and admired by the locals: the casa delle girandole, the house with the pinwheels.

Donato Zangrossi (1905-1990) already as a young man liked making drawings and he also was rather interested in reading books, especially about philosophy and astronomy. However, he got a job as a factory worker. 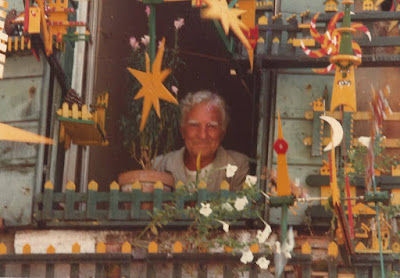 He married and got three children, Tragically his wife died at an early age. Zangrossi remarried and the couple settled in the house of Zangrossi's parents in the Campo Castelforte quarter of Venice. 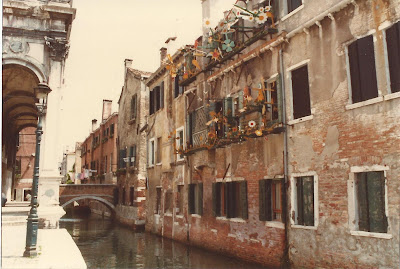 Probably in the 1960s he began decorating the exterior of this house, first embellishing it with a couple of pinwheels he had constructed himself, then also adding more kinetic art and small colored wooden items.

In the 1980s the exterior had become fully equipped with these self-constructed wooden items and pinwheels.

After Zangrossi died in 1990 the decorations were no longer cared for.

The next picture, a screenprint from a 1995 video (see documentation), shows the facade as it was some years after its creator had passed away.

Recently, in relation with the Italian Costruttori di Babele project, interest in Zangrossi's creation and comparable ones in the Veneto region has increased.

Giada Carraro, correspondent of the project, already wrote a thesis about this art environment and in 2014 she published a book about the site.

In general Giada is active in promoting interest in arte irregolari, inter alia by organizing conferences such as one about the Casa Bepi Suá on Burano, which took place in 2013.