Charles Clave (1920-1998), nicknamed Charlot, from the French community of Frasne-le-Chateau, claimed he had an astral contact with aliens, whose likeness he captured in homemade sculptures in a naive style.

Probably all his life  Clave lived in Frasne-le-Chateau, in any case he lived there with his mother in a house on the rue des Grandes Vergers, later living there alone after his mother had died.

He had various jobs. Initially he was a cultivator, then he did a training to become a police officer, a job he waived however to become a postman instead, while he later became a mason. 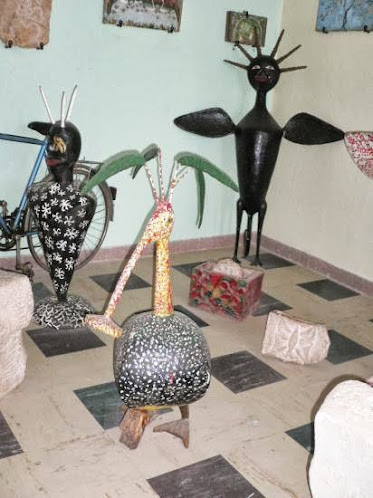 In the 1950s Clave began making sculptures, focusing in particular on extraterrestrial characters.

All together he has made some twenty sculptures of aliens, which he exposed in the sleeping room around his centrally located bed. This ensemble of sculptures, a mini art environment, locally became known as Musée Charlot. As far as I understand it could be visited by the public on Sunday afternoons.

Following Clave's death, the house was put on sale. It was bought by Christine Péquignol, who has (had?) an art gallery on the premises, named Empreinte d'Art (Art's Footprint). By a plaque on the facade the memory of Charles Clave is kept alive.

The city hall of Frasne-le-Chateau takes care of the sculptures and other creations by Clave which they received as a legacy.