San Daniele Po is a small community of some 1500 inhabitants in the Lombardy region in Italy.

The exterior of a house located along a side street of the Strada Provincial 85 that intersects the village, for years now has been reconstructed and decorated by its inhabitant, Enrico Capra.

Capra (1934-2014) all his life lived in that house. His youth may have been problematic, his father died from an illness when he was nine years old, it was wartime and the young boy was often ill.

At age fourteen Enrico started working as a mason, although he had preferred to become a carpenter.

Capra never married, and living with his mother in the house, he may have had a somewhat withdrawn life. His main passion became decorating and reconstructing the house. 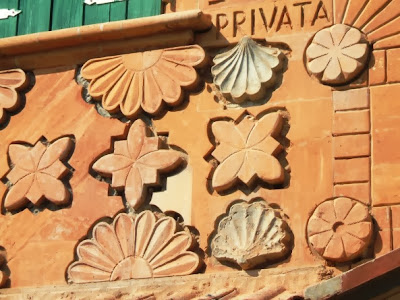 He began this project after his mother died in 1970 (the earliest date on a wall is 1974) and when he became retired in 1994 he would spend all his time to his creative passion.

Capra sculpted terracotta bricks which he applied on the walls, like he also made concrete ornaments.

With material from demolished houses he constructed balustrades, balconies and columns, changing the rectilinear forms of the house into more circular ones. 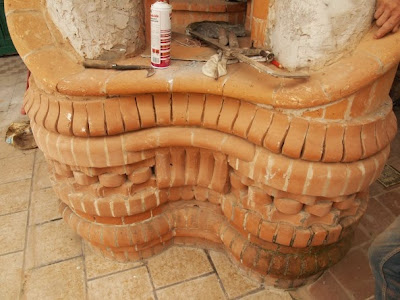 All together, the elements added to the house have redefined it into a place where one can stay in a peaceful atmosphere and feel somehow protected from the outer world.

On January 27, 2014 Capra passed away. To his memory Cristina Calicelli created a Facebook page. which offers a variety of pictures.

Since Capra was not married and had no children, it remains to be seen who inherits the property and what its future will be. The house is for sale, but until 2018 no buyers have reported.

Enrico Capra
44 via Cantone
San Daniele Po, Cremona, Lombardia, Italy
can be seen from the street