When I in the late 1990s began searching the internet for information about art environments in France, I soon came by pictures of an abundantly decorated house, included a depiction of a big cat.

This artwork created by someone named Chop, on the internet mainly got attention on touristic websites. French sources dealing with art brut had no information about this site.

In April 2013 however, Sophie Lepetit wrote about this site on her weblog, referring to an article in a French newspaper that provided some background information. So`with this information I now can present the story.

Chop was born in 1947 in Paris. His mother was a young unmarried girl, who couldn't care for him, so for some months he was left behind with a sloppy family and then was cared for by an aunt, who lived in the Yonne area. This background made him decide to hide his family name to the public and always use a pseudonym.
As a young boy Chop already was attracted to make paintings, preferably on large surfaces, since already then he thought one should be able to "bathe" in a painting.....

At 18 he went to Paris, where he earned his living with various small jobs. He also must have stayed some time in Amsterdam, but returned to Paris to become a street painter in the Quartier Latin. 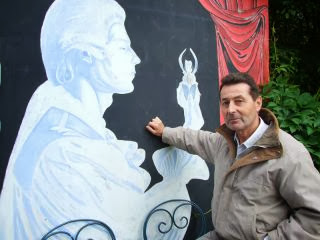 It is not clear whether or not he attended any art classes in Paris and/or Amsterdam. The newspaper article has no information about this, but I suppose Chop is a self-taught artist.

Anyway, in 1969 Chop left Paris to wander France, but soon, in 1970, he settled in the small cabin in Venas he had bought with some friends, but which he ultimately got owned.


In and around this house, where he would stay for the rest of his life, he could fully express himself in his own artistic way. Chop likes the music of Chopin (indeed, the pseudonym is taken from this composer) and his way of doing, as well as the way he has transformed the cabin into an art work, has many baroque characteristics. 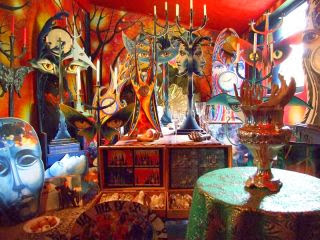 Interior and exterior of the cabin have been decorated abundantly in vivid colors, inside everywhere there are candlesticks, Louis XV costumes, bizarre clocks, objects with painted eyes, items that represent the seasons..... 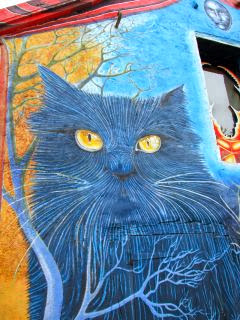 It is understandable that Chop in particular has got publicity on touristic websites, because he soon got fame because of the special tours in and around his house he would offer tourists who visit the region. And then, Chop is also is rather skillful in raising publicity 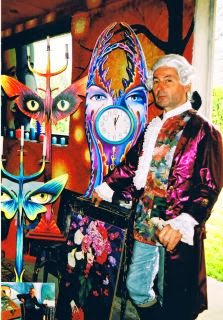 Dressed in a Louis XV costume, wearing a wig, Chop entertains small groups of visitors with a very personal and dynamic performance, explaining that nature and the seasons are his source of inspiration: Nowadays artists are not interested in flowers or leaves, they only take purely intellectual things. Me, I sublime life and death through nature, as he is quoted in the newspaper article.

Chop is beyond this time, an outsider in his own right, who has made a wonderful, very interesting art environment, maybe not to everyone's taste, but since when is that a criterion?