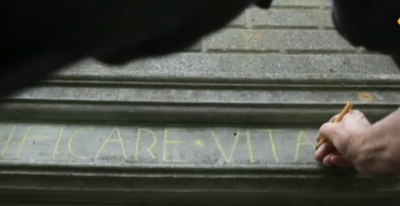 Aedificare vitam est.....constructing that's life... this describes rather well the typical state of mind of all these non-professional builders who -as so many self-taught artists presented in this blog- devote a large part of their life to creating something they consider as essentially beautiful.

Chris Goedhart was born in a family with ten children, living in a community in an agricultural area in the Dutch province of North-Holland. He lost his father at a young age.

In his youth Goedhart experienced a lot of poverty, which he tried to soften by dreaming away in an old Dutch magazine with lots of images of classic Italian structures.

As a young boy he preferred a set of blocks as a toy and by allowing cement to harden in matchboxes. he himself small blocks he could use to make toy buildings.


Once adult Goedhart could buy an old farmhouse, which he renovated during twelve years

When this project was completed, Goedhart turned his desire to build on creating an Italian dream garden, fascinated as he was by classical Mediterranean architecture.

To protect a palm in the garden against the occasionally firmly blowing winds in the flat countryside of North-Holland, Goedhart constructed a wall.

This was the beginning of a forty year project, which resulted in a garden with various gates, arches, pillars, cascades, a Roman bath, ponds and a tea dome. An Italian dream garden indeed. 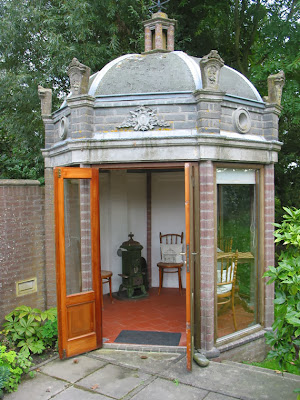 Goedhart's art environment is an ensemble of carefully constructed classical works with a focus on the beauty of forms and without fuss.

It was the sheer joy of building as such which drove him. Indeed, Aedificare vitam est.....

In the Netherlands the site is appreciated by lovers of gardens and the members of the Dutch branch of the British Folly Fellowship, established in the United Kingdom.