The internet probably has just one primary source that describes this art environment in Italy created between 1930 and 1940: the article from 1981 referred to in the documentation written by Francesco Ranucci, descendant of the man who created the site.

Born in the Italian community of Viterbo, Vincenzo Lucchesi (1864-1940) got a job at the court in the Palazzo di Giustizia, in nearby Rome.

In 1894 he inherited a farm just outside Viterbo with a large area around it, kind of an estate, a property that had been acquired by his ancestors in 1712. 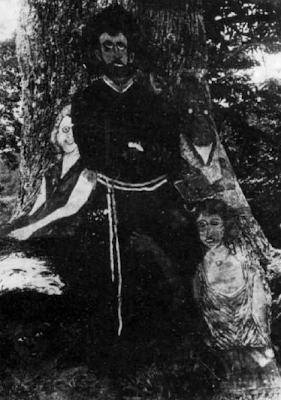 In 1930, probably after Lucchesi had become retired, he began to transform the wooded area near the farmstead into an art environment. He painted tree trunks so that they depicted people, made life size puppets, added posters with texts and arranged all kinds of scenes. The general idea behind all this was to show the way of life in Viterbo and Rome around 1900 as Lucchesi had experienced it.

So the puppets depicted personalities such as police officers, monks, ballerinas and so on. The scenes included the gelataria  (ice-cream shop), the pasticceria (pastry shop), a tobacco shop or a café. 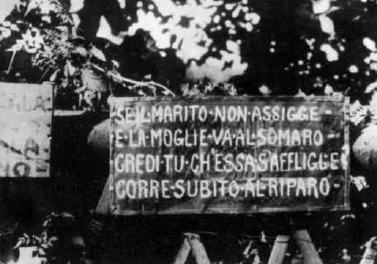 A cheerful man, Lucchesi likely enjoyed to welcome visitors who came to see the site and up to old age he has remained active in its maintenance.

After he died on November 1, 1940 the site has fallen into decay.

Currently the farmhouse is an eco-touristic Bed and Breakfast, named "La Meridiana Strada".