In the small community of Lézardrieux, on the north coast of Brittany, France, René and Huguette Pellé in the 1990s began decorating the garden around their house.

René, who was a carpenter, in 1994 because of Quatorze Juillet constructed a mill which he put in his garden.

This was the beginning of a project that would keep René and his wife Huguette active for the rest of their life.  In the course of the years René made all kinds of wooden constructions, such as cabins, light houses and carriots, but also two- and three-dimensional animals and various other large and small items. 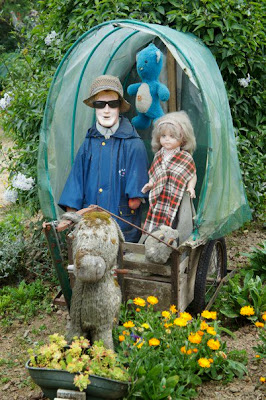 Huguette's share in the project is to paint the constructions, which she often does in blue, a color she likes. And then she will also provide the costumes for the life-sized puppets that animate the wooden constructions.

These puppets have been made in a rather simple way by using straw or a comparable easy to manipulate material to shape the body, a mask as a face and used clothes to dress them. Neighbours will help the couple in gathering sufficient material.

In the course of the years the garden has grown into a colorful, charming and alternate assembly of creative constructions.

I couldn't find information about the birth dates of the Pellé couple, but I suppose they are from the 1930s, so when this text was published  (2013) they might be approaching or be in their eighties. In 2022 a regional journal published a list of people from Lézardrieux who had died, among whom René Pellé who had died on January 1, 2022 at age 91 and Huguette Pellé who had died in 2021 at age 86.