One would suppose that shell decorated houses and creative constructions will be mainly located in coastal areas and in general this is also the case ¹. But of course there are exceptions ², such as the one in Verona, Italy, presented in this post ³.

Angelo Cerpelloni (1923-2006) was born in the small community of Quinzano, a suburb of the town of Verano, Italy, some four kilometers northwest of the city center.

After he had various jobs, he became a mason. Around 1951 he married a young lady from Milan and the couple settled in this city. They had two sons.

In the early 1970s Cerpelloni got tuberculosis and was declared unfit for work. To live a more quite life, as suggested by his physician, he moved to Quinzano, where he settled in kind of a barn he had inherited from his father. For economic reasons his wife and sons stayed in Milan. 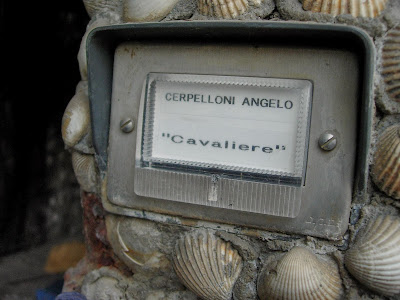 When his health improved, but being without prospect of a job, he began reconstructing and enlarging the rather humble dwelling, adding floors, balconies and a roof garden, doing this without any training in this kind of construction work.

It is not clear at what time Cerpelloni began embellishing the exterior wall with shells, probably it happened when the structural works were well advanced. Neither is it very clear how he obtained the large quantity of shells needed to cover all walls. 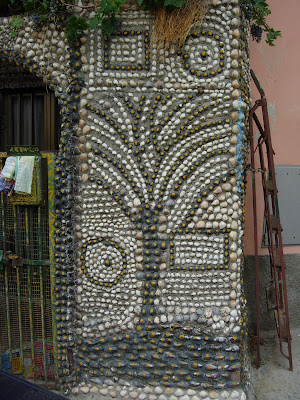 There is a story that friends offered him these shells as a souvenir of a seaside holiday. This may be so, but to decorate the exterior walls, large quantities of shells are needed, so is it plausible that friends bring loads of common shells? 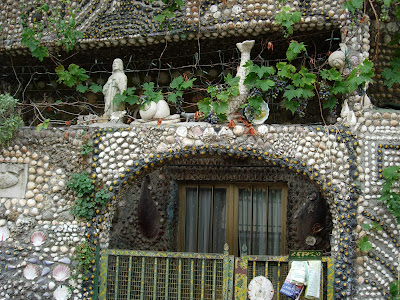 Anyhow, in the course of some fifteen years of creative activity, Cerpelloni has transformed his house into a shell decorated art environment, with shells -both rare and common ones- laid in geometric patterns or in representations of trees, fishes, and the like.

The interior has been decorated too with smaller compositions of shells

The house has been restored

After Cerpelloni died in 2006, the inheritors sold the property.

The construction of the house was considered as hazardous by the neighbors and it needed some restoration indeed. The local authorities showed no interest in what they saw as a foolish creation, but the new owners bought the house with the intention to renovate it in a way that would somehow respect its artistic aspects.

Although the local authorities wanted to demolish the house, the Italian Heritage Board intervened just in time and a restoration project was implemented. 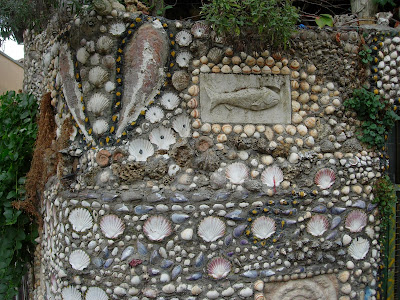 This project, completed in 2010, has taken three years.

It  involved the removal of the upper balcony and the roof terrace. Unfortunately, over half of the exterior decorations have gone lost and the decorations in the interior do not exist anymore.

But then, a number of characteristics of Cerpelloni's creation have been preserved and still can be admired from the street, which is more than can be said about creations elsewhere, that are completely gone.

notes
¹  for example the houses in Dartmouth (UK), Thyboron (Denmark), Pont ar Manc'h (France), Cullenstown (Ireland) and Tazones (Spain)
²  for example Watford (UK), Saint Gervais (France)
³  I like to acknowledge that this post draws upon the extensive field research by Giada Carraro as reported in her article referred to in the documentation; interpretative aspects are my responsibility

Angelo Cerpelloni
La casa delle conchiglie
Via Prelle 37
Quinzano, suburb of Verona, Veneto, Italy
can be seen from the street
streetview (with pictures of the decorations)
Posted by henk van es at 6:10 PM