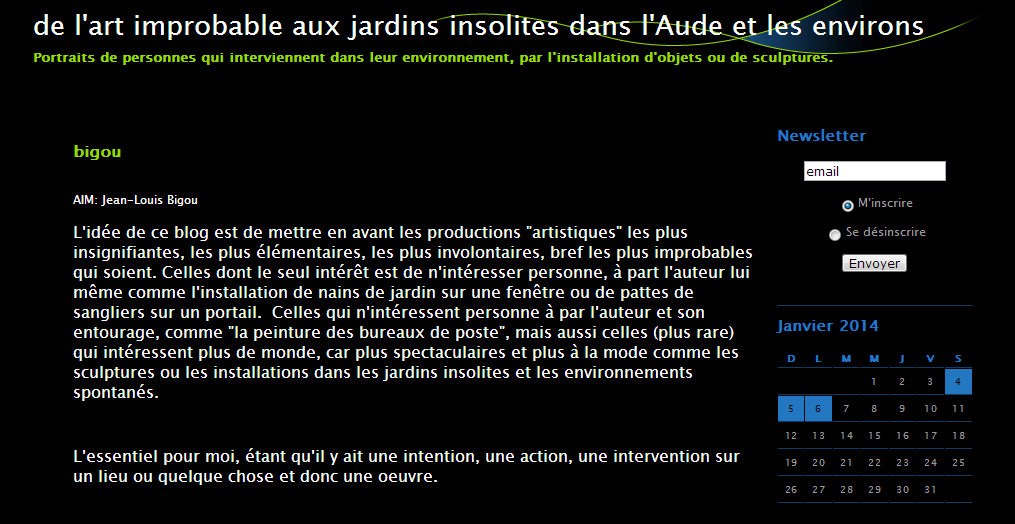 Aude is a department in the south of France with a centuries-old history, in the Languedoc-Roussillon area, best known by its cities Narbonne and Carcassonne.


Art improbable
Art improbable is a rather new term. As is best demonstrated by above picture, it has to do with (ensembles of) smaller objects used by people to decorate their place of living.

Not all items in this category will be covered by the description. As Jean-Louis Bigou says: Pour être improbable, la création ou l'installation doit avoir un caractère, tout au plus décoratif mais surtout pas volontairement artistique (To be improbable the creation or installation must have a character, which at best is decorative, but certainly not intentionally artistic).

This can be considered as an interesting approach, which might open a new sub-field in the area of outsider art environments.

As regards art environments the new weblog since November 2013 already has paid attention to a number of creations in the south of France, such as those by René Escaffre, Robert Mathey and Joseph Donadello, which in France already got internet publicity on a national level.

But then the new weblog also has the story of sites about which in France on a national level the internet only has limited information. A good example is La Maison Fleurie  in Lézignan, created by Antoine Puéo. (On my blog a year ago I had a short message about the proposed demolition of the house).

The same goes for the sculpture garden by Georgette and Hubert Bastouil.

The boundary between art improbable and art environments obviously being fluent, it will be exciting to see what insights and information the new blog will bring us.
Posted by henk van es at 8:08 PM