At the time this post was published (December 2014) above pictured house in the community of Monesma de San Juan was for sale, advertised as Casa de Cristál.

With its about a hundred inhabitants, Monesma de San Juan-located in the northern Spanish countryside- is a very small village where everyone knows each other.

The Casa de Cristál is the creation of an inhabitant of the village named Félix Sanpériz Gistau ¹.

Born in Monesma in the early 1930s in a family of farmers, Sanpériz grew up and went to school in the village. As an adult he probably had a job as a construction worker in the area around the village.

Around age fifty, in the 1980s, when his parents had died and the other two children had left the village, Sanpériz lived alone in the house. He was nicknamed the bohemian, which probably had to do with his artistic and other than average lifestyle.

Around 1989 he began decorating his house, in particular using green wine bottles he collected at the local restaurant and got from locals.

These bottles, stronger than the usual ones for wine, typically contained cava, a sparkling wine, with a second fermentation in the bottle. Filled with cement they can be used as construction material, without cement the bottles in whole or in parts can be used as decorative elements.

Sanpériz applied a plurality of operations with the bottles.


The entrance gate (pictured above) has a half round arch, lavishly decorated with bottle bottoms. On the fascia above the arch an inscription reads: Casa Felix y su linea Sanperiane (Félix's house from the Sanper lineage).

The interior patio, pictured above. has a door to the house's interior with a face-like decoration, a pictorial element that returns a number of times in this art environment.

To the right of this door an ornament made of bottles hangs above a basin.


The house has a number of these hanging or standing ornamental structures made of green bottles and iron rods. 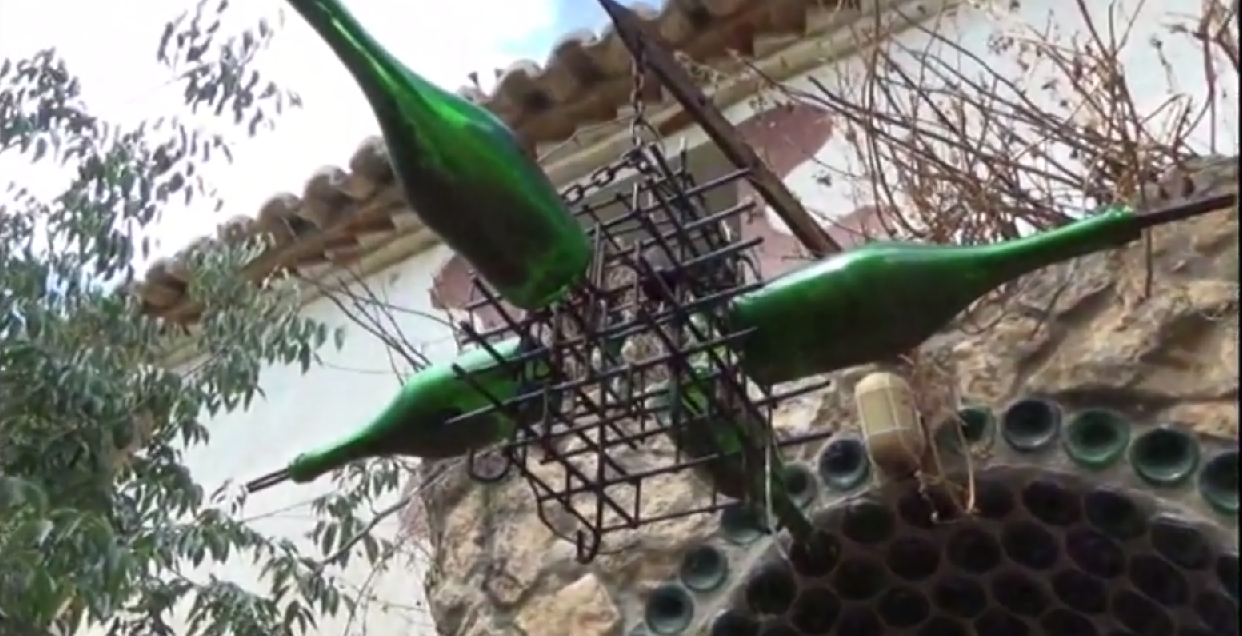 The pictures just give a limited impression of the various parts of the two-story house, which apart from the decorated facade, the entrance door and the interior patio, has a carport, a garage, a garden, a rooftop terrace and indoor living-rooms, all more or less decorated.


For about nine years Sanpériz worked very intensely to transform his house into an art environment. Maybe he had the dream that once he could start a restaurant at the premises, but probably we will never know, because there are no reports available of people who talked with him about his motivations.

Anyhow, when he had done such a lot of work, Sanpériz decided to sell the house. Once more it is unknown for what reason he did so. The house was bought by a farmer from the area, who used it to house seasonal farmhands from other countries.

According to locals Sanpériz went to live in Barcelona, but further information about him is lacking.

As said above in 2014 the house once more was for sale. It was advertised as: Casa única y original, adornada con cristal como elemento innovador. Ha salido publicada en TV, prensa, libros , internet… como casa de especial interés (inspirada en Gaudí)......Unique and original house, adorned with crystal as innovative element. It got publicity on TV, in newspapers, in books, on the internet ... as house of special interest (inspired by Gaudi).

It is not clear if the house meanwhile has a new owner.
Situation late 2021 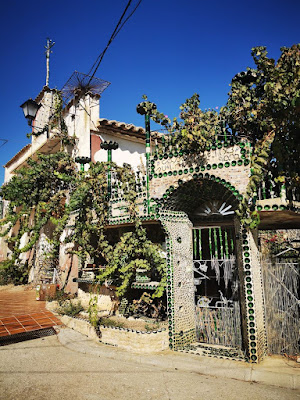 Documentation
* The site got a scholarly review in: Jo Farb Hernandez, Singular Spaces. From the Eccentric to the Extraordinary in Spanish Art Environments, p.132-139.  Seattle (Raw Vision, SPACES, San José State University), 2013. ISBN 978-0-615-78565-3. An abridged version on the website of SPACES.
* Fragment (around 2014) on the video North Spain Trip by Sergio Flaquer Carraras on YouTube, starts at 1.40.55

¹ To my knowledge Jo Farb Hernandez (see documentation) is the only one who has published articles about this site and its author, so I like to acknowledge that this post is based upon Jo's research.