On the western side of Barbastro, a city in the Aragón area in the north of Spain, located along the A1232 road one can see a decorated house with an adjoining garden that includes various decorative structures.

This art environment has been created by José Foncillas Ribera¹ (b. 1928), who began making it around 1990 when he retired.

Born in the small community of Bespén, not far from Barbastro,  in a family of farmers, Foncillas after attending the local primary school, at age eleven began helping his parents at the farm, until at age twenty he had to fulfill his military service.

He remained in the army until he was almost thirty years old and then returned to his native region, settling in Barbastro, where he in the early 1960s started a firm engaged in transporting construction materials.

vHe bought a plot of land along the A1232 road and late 1961 he built there a two-storey house, completing its construction in some three months. Foncillas married in 1962 and the couple would live in this house until 1973, when they moved to an apartment in town in order that their two children would live closer to school.

The house outside town would be used as residence for the weekends and to grow vegetables in its garden.

Already as a youngster Foncillas showed great interest in fossils and geologically interesting rocks he uncovered when plowing, but which he also gathered in river beds. His art environment has a specially constructed facility where his collection is stored.

Although during his professional life he occasionally was creative with these rocks, once retired -around 1990- Foncillas developed an artistic approach on a much larger scale by decorating interior and exterior of the property, a project that would keep him active for over twenty years.

At first engaged in the interior, he embellished walls, ceilings and floors meticulously. leaving no square inch unused. A ceiling is decorated with egg cartons painted in many colors, another one with mussel shells. And then the adornment includes many different attributes, such as wooden slabs, tiles, rocks, shells, glassware, but also bas-reliefs and painted scenes (No pictures of the interior available).

The exterior walls of the house have been fully decorated with wooden slabs, which originate from olive trees, cut out on demand by the local carpenter. The picture below shows this decoration in detail.


The garden at the left side of the house as seen from the street has a variety of structures.

One of the most impressive creations is a 9 meter high complex sculpture with a man on top with tools and a dove, protected from the sun by a higher situated parasol or sombrero, a self-portrait, sculpted from a single block of stone.

The structure on which the man is standing has a variety of details, one of these features Columbus' discovery of America with images of the three ships of Columbus' fleet and outlines of North and South America.

At the side of this large structure stands a quite different creation, which represents a space shuttle. The upper part has been made from aluminum and the bottom side consists of recycled wood. Apart from the Spanish flag which can be seen on below picture, the shuttle originally also had the flags of the USA and the EU in top.

Among the various other structures that decorate the garden, there is kind of a tiger with curled front legs, sculpted in stone, a geisha with a sandy face and clothes decorated with glass beads and small shells, and then there also is a somewhat leaning three meter high Eiffel Tower.

These few examples of Foncillas's creative activity demonstrate his varied use of materials to make his creations,

What stands out in particular is his use of stone blocks, which is an extremely hard material, difficult to work with in making sculptures.

Foncillas, who at the time of writing this post (December 2014) is in his eighties, currently is no longer active in creating large structures, but he still is making smaller ones.

The garden and the decorated exterior of the house can be seen from the road. Due to Foncillas' age, the opportunity to visit the interior is rather limited.
Situation late 2021 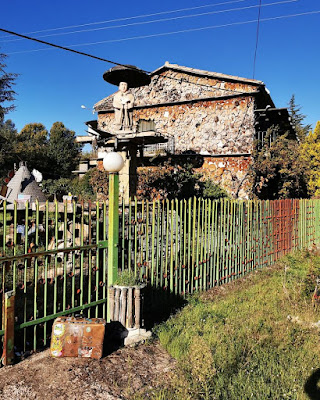 The picture above, made in October 2021 by Tiramisu Bootfighter, who traveled through Spain in the context of his project La Valise, Galerie Ambulante, shows that the site at that time still was in good condition.
Documentation
* The site got a scholarly review in: Jo Farb Hernandez, Singular Spaces. From the Eccentric to the Extraordinary in Spanish Art Environments, Seattle (Raw Vision, SPACES, San José State University), 2013. ISBN 978-0-615-78565-3. It is summarized in an illustrated entry on the website of SPACES.
* José Luis Pano, "Arte Bruto en el Somontano en Barbastro y Monesma de San Juan", in regional journal Ronda Somontano (August 2016)

note
¹ To my knowledge the only review of this site both on the internet and in print has been published by Jo Farb Hernandez (see documentation), so I would like to mention that the information in this post is derived from Jo's work

first published December 2014, last revised October 2021
José Foncillas Ribera
Decorated house and garden
along the A 1232, west of the city
Barbastro, region Aragón, Spain
can be seen from the road
streetview
Posted by henk van es at 9:53 AM