Located on a busy road that crosses the community of Arguedas in the Navarra area, Spain, an abandoned building attracts the attention of passing motorists because of its exterior that has been abundantly decorated with colorful drawings and texts.

This is the art environment created by María Àngeles Fernández, known as La Pinturitas.

Born in Toledo in 1950, in the early 1960s, Maria Ángeles Fernández moved with her father to Arguedas. In 1973 she married a young man from this community and the couple would have four children.

Maybe due to some traumatic experiences at a young age, Maria Fernandez could be agitated and so occasionally her children were cared for by the social service and it so happened that her youngest child at some moment was housed elsewhere, Maria Fernández never knowing about her whereabouts.

Around 2000, some fifty years old, Maria Fernández got the idea to relieve her emotions by finding an outlet in making paintings, whereby she did not opt to working indoors on canvas, but rather decided to manifest herself outdoors by fabricating her creations on the wall of abandoned building.

Indeed, Marìa slept better after she had begun this artistic adventure.


The outer side of this building, an abandoned restaurant with annexes, stretching along the street, has a surface of some fifty meters long and six meters high, which currently is completely covered with her creations.

The owners of the building gave their permission and the local authorities up to now made no problems either.

A fully autodidact, María Fernandéz would use simple brushes and paint,  mainly work with primary colors and find her themes in human faces, people and animals, added with exclamations in text.

The first years she only worked on the exterior wall facing the street, painting as high as she could reach. If no more space was available, she covered a part with white paint and redecorated it.

María Fernández, who on photographs and in video's always appears tastefully dressed, is a dynamic personality, who can endlessly talk about her creations and who likes to support her argument with dance steps and elegant moves.

In recent years, now that the bars in the windows somehow have disappeared, María  Fernández also invaded the inside of the building, making her decorations on the interior walls. Currently she is mainly working inside and she also began making paintings on canvas.

Around 2010 she became known in the world of outsider art

When in the early years of the new century social media began to flourish, news about María  Fernández' artwork began to spread across the internet (pictures on Flickr, video's on YouTube, the first one in 2008).

This may have contributed also to a change in the attitude to María Fernández of the inhabitants of Arguedas, which generally has become more favorable.

An important contribution to spreading news about this outsider artist was made by French photographer Hervé Couton in 2010. That year his pictures of and texts about her work were published in Raw Vision #69 (summer 2010). in the French weblogs/websites of Laurent Danchin (not available anymore), Joe Ryczko and Bruno Montpied and in the Swiss website of the Collection d'Art Brut.

Later, in 2014 Couton contributed an entry to the SPACES website.

Above photo, made by Couton in August 2016, shows that the decorations on the inner walls now constitute a major artwork.
Situation in 2021 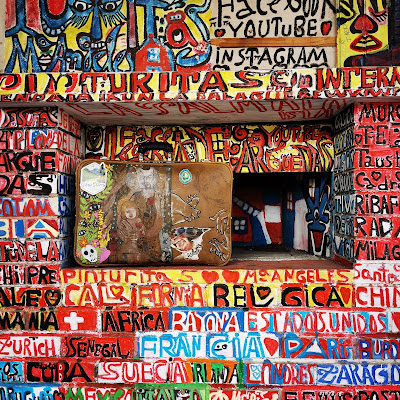 Videos
* Video by Kdreitanav (2'47", YouTube, uploaded October 2008), one of the first publications on the social media about Fernández. In later years various videos about her were added to YouTube


* A video shot in the summer of 2012 by Hervé Couton, edited by Mycelium, showing Fernández at work in the interior of the building (5'58", YouTube, uploaded febr 2013)

* Fernández dancing, singing and explaining her artwork in a video by Caroline Gimenez and Geronimo Saurigny (5'12", Vimeo, 2013, subtitles in French