Jurva is a community of some 4500 inhabitants in the south-west of Finland in the Southern Ostrobothnia region.

Olavi Laiho¹ (b. 1951), an inhabitant of this community, has transformed the area around his house into a sculpture garden, as above picture by Minna Haveri shows.

Already as a youngster Laiho felt attracted to sculpting and he liked carving a bear or other animals from a piece of wood, just using a knife. His parents however would have none of these creative efforts. From their political point of view they considered this as bourgeois and thus an eventual professional artistic career of Laiho was stifled.

He became a carpenter and settled himself in Jurva, where he bought a house in a wooded part of the community.

In his spare time he began creating sculptures, made from concrete or carved out of wood, which he displayed in the garden around his house. 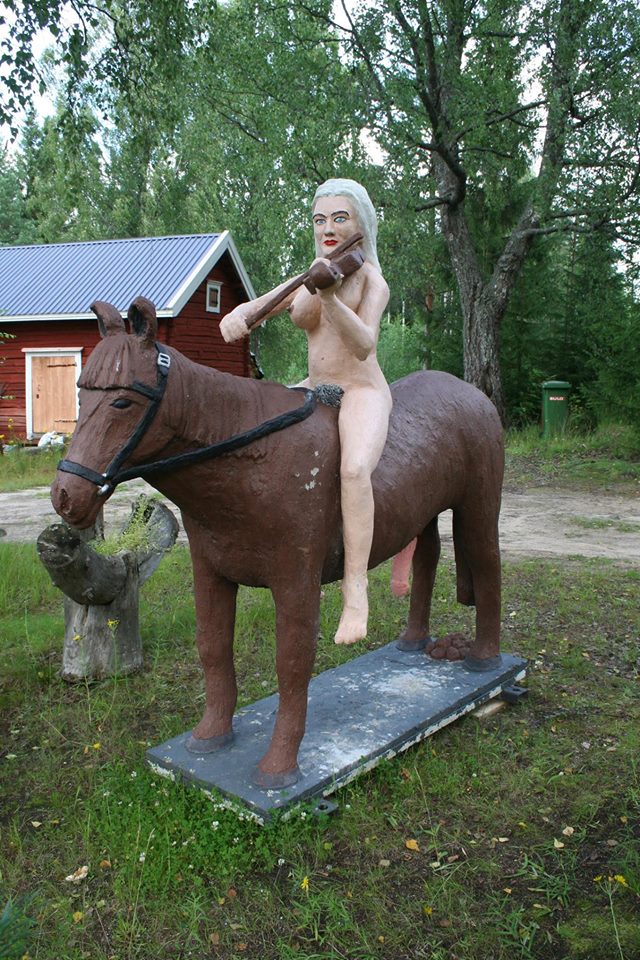 Inspired by pictures in illustrated magazines, Laiho's sculptures are rather realistic, impersonating characters such as Charlie Chaplin, a giant bear, a peasant woman milking a cow, men playing an accordion and celebrities, such as Linda Lampenius (Linda Brava), a famous Finnish violinist and model (pictured above sitting on a horse and playing the violin).

As far as I could ascertain, Laiho's art environment until now has not raised much publicity in Finland (the internet just has a couple of referrals).

His work however has been exposed in the major exhibition In Another World,  Kiasma museum, Helsinki, 2005).

Documentation
* Erkki Pirtola "Olavi Laiho", in Seppo Knuuttila (Ed), ITE-Art in Finland, Helsinki (Maahenki), 2011, p 44-47
* Entry on the website ITE-net (an abridged version of the above article by Erkki Pirtola)

note
¹ to my knowledge the only text on the internet about Laiho's art environment is the entry on the website ITE-net, so I like to acknowledge that this post is based upon Pirtola's article