In the northern Spanish community of Rincón de Soto a property from 2011 has been transformed into a trencadis art environment, involving the decoration of its various walls with colorful mosaic.

It is a creation designed by Cecilio Medrano Mendizábal and implemented by his son Miguel Medrano Lapedriza.

Cecilio Medrano was born in Rincón de Soto (November 22, 1949). First he became a farmer, but later he taught himself the skills of forging iron and in 1982 he opened his own blacksmith workshop in town, producing practical materials, such as iron banisters, balconies, railing, and agricultural implements.

However, Medrano when young already showed artistic talents and in 2002 he began crafting design furniture, such as tables, sofas and chairs, but also free standing sculpted creations, made by combining various materials, such as iron, wood, and natural stone.

The some 150 creations he produced until now are scattered through his house, but are also displayed on various spots in Rincón de Soto,

A very special item is an enormous pear, La Pera de Rincón, made in 2013 as a homage to the city which is famous because of its production of high quality pears.

In 2011 the project started to decorate the walls of the property with mosaic. In Spain this style of decoration, used by Gaudy and other Catalan artists, is known as trencadis, in other countries it is also called pique assiette.

The first phase (2011-2012) involved decorating the rear facade (pictures above). a surface some ten meters wide and five meters high. The wall has been decorated with colorful mosaic interspersed with more or less realistic images such as a radiant sun below representations of heavenly bodies.

The next phase (2012) involved the high rising rear wall. Once more colorful surfaces, interspersed with semi-realistic images that represents kind of a roofing, a chimney, a mountain....

Next -in 2012- the terrace at the house's backside was decorated. This decoration, based upon an earlier drawing by Medrano Sr, shows a gardener watering his garden.

Decorating the side walls (2013) was the last phase of the project, a difficult one because of the scaffold that had to be used on a sloping roof.


This part of the art environment is probably the most extensive one in terms of square footage. It once more has a radiant sun and the long part of the wall portrays a road amidst a landscape.

It's a quite road, where just one car moves. Medrano's memories of earlier times ? .....
Situation late 2021 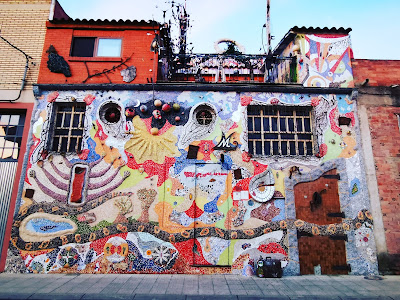 The picture above, made in October 2021 by Tiramisu Bootfighter, who traveled through Spain in the context of his project La Valise, Galerie Ambulante, shows that the site at that time still was in good condition.
Documentation
* Weblog La Rioja en mi blog, September 2014, more pictures

Videos
* Scenes of the site (2015) on the North Spain trip video by Serflac (YouTube, starts at 58.01) with a general impression of this art environment and images of  Medrano's various stand-alone artworks (cannot be embedded here)
* Videos made by Miguel Medrano and downloaded on YouTube which demonstrate the realization of the decorations in its various phases