Above picture shows a scene of a room in a closed ward, part of a hospital in Göttingen (Germany), as replicated in a transportable walk-in construction which can be shown on expositions.

In the 1950s the walls of this room have been completely decorated by the inmate who lived there. Only in recent years the existence of this art environment has become known by the general public.

Born in Hanover as son of a postal worker, Julius Klingebiel (1904-1965) became a blacksmith, a job he held in the German army. He was a member of the Sturmabteilung of the NSDAP (the para-military organization of the national-socialist party).

In 1939, suffering from a psychosis, in a serious outburst of anger he killed his stepson and threatened his wife. Arrested by the police he ended up in psychiatric custody.

Diagnosed as paranoid schizophrenic, in 1940 Klingebiel was included in the Landesheil- und Pflegeanstalt, a hospital in Göttingen, where he stayed in various departments.

In accordance with national-socialist law giving he was forcibly sterilized, but he just escaped the Nazi euthanasia program, in all probability thanks to the then director of the hospital. 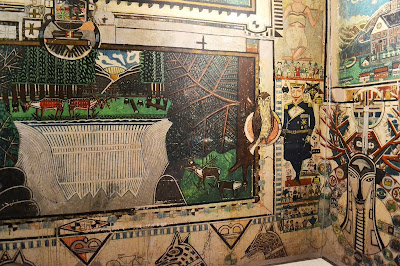 In 1951 Julius Klingebiel was transferred to cell number 117 of the hospital's closed ward, a building with all the characteristics of a prison, After the war for unknown reasons his case wasn't reassessed although this was required by law, so he now was forcibly hospitalized without court ruling, a forgotten man, who never had visitors.

Former nursing staff say he was a difficult man, occasionally excited and confused, withdrawn and sad, but also as original and imaginative. 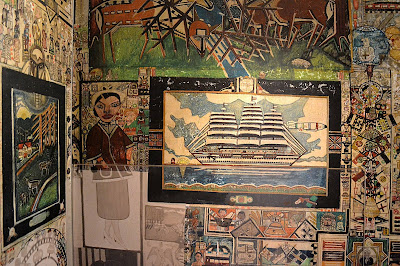 Rather soon Klingebiel began to decorate the cell where he stayed. The story says that one day when outside on the institutions grounds he found a small piece of coal which he used to make a drawing on a wall of his cell.

This apparently struck him, because he continued his creative work, trying out painting small designs with a substance made of toothpaste, coal, wood and stone.

When the nursing staff noticed that this creative activity made him calm, he got real paint and a brush, and thus Klingebiel began making larger paintings. 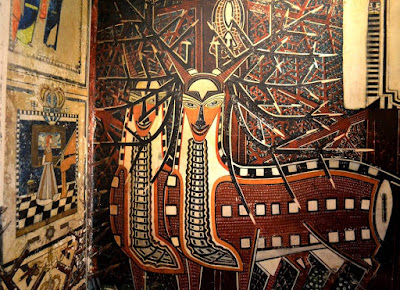 If needed he would paint over existing work. No part of the walls remained unused 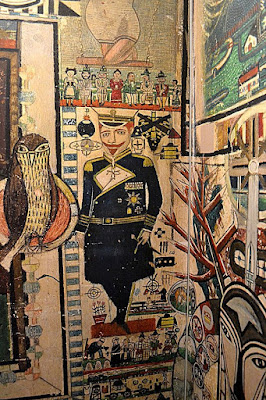 In this way his room became an art environment, or Raumkunstwerk as it is called in German.

In later years Klingebiel also made paintings on paper. Currently some thirteen works have been preserved.

In 1961 Klingebiel was administered a newly available drug. His psychic condition improved and he stopped making paintings and decorating his room. In 1963 he was transferred to another department where he died May 26, 1965.

After Klingebiel was transferred to another department, the institute kept the decorated cell room as it was. It was used as a storage room and one took care that the curtains remained closed to protect the artwork from daylight.

Just a small group of people knew about its existence. Opening the site to visitors was not possible in this closed ward. There was silence around Klingebiel's artwork.

However, since 2010 there were new developments.

The social-psychiatric research group in Göttingen, supported by and cooperating with various partners, began a research project, which resulted in a book edited by Andreas Spengler, Manfred Koller and Dirk Hesse, which was published in 2013.

Then, in 2012 cell 117 was registered as a cultural monument (Denkmalschuss, in German), which implies it has a protected status by law.

Subsequently expositions were organized which made use of the available material and of a walk-in reproduction, first in 2013 in Asklepios Fachklinikum Göttingen (August 14/August 30), then in 2014 in Berlin in the Kleisthaus (October 16/November 21).


Early 2015 it was announced that the hospital would stop the use of the closed ward, which gave rise to a discussion how to preserve Cell 117 for the future. The best solution would be to maintain this art environment at the current location, while the rest of the building, which is owned by the government of the federal state Niedersachsen, will get a matching destination.

The Sprengel museum in Hanover has announced it's interest in adding Klingebiel's artwork, somehow loosened from its actual location, to its collection, but in general the government of Niedersachsen and the local authorities of Göttingen believe the art environment should remain connected to Göttingen.

Further decision making must be awaited. From a newspaper article from January 2018 it appears that at that moment no solution is available.

Documentation\
* Projekt Julius Klingebiel is a documentary website that reports both life and works of Klingebiel, and all activities that have to do with his legacy (expositions, articles, books, etc); the site is in German, with an abstract in English
* Article in Wikiwand
* Website Elementarkräfte with an entry about Klingebiel
* Ausbruch in die Kunst. Julius Klingebiel, Zelle Nr 117. Catalog (available on PDF) of the exposition in Kleisthaus, Berlin, October 16/November 25, 2014
* Ursula Scheer, "Kunst passt in die kleinste Zelle" (Art fits into the smallest cell), article in Frankfurter Allgemeine, june 14, 2015
* Antje Schmidt, "Ausbruch in die Kunst. Die Zelle des Julius Klingebiel" (Outbreak in the Art. Julius Klingebiel's Cell). Documentary movie, 43'52", broadcasted on German TV (NDR), June 14, 2015 (can not be embedded here)
* Andreas Spengler and Thomas Röske, "Art behind bars. A sensational discovery in a German cell", in Raw Vision #93 (spring 2017)
* Thomas Röske, "La Cella dipinta di Julius Klingebiel", in: Rivista dell' Osservatorio Outsider Art, nr 16 (autumn 2018)