Located in southwest Turkey, facing the Aegean see, Bodrum is one of the most important holiday resorts in the country. Turkey was one of the early members of the Council of Europe in 1950, in 1963 it became an associate member of the EEC, it joined the EU Customs Union in 1995, and in 2005  accession negotiations with the European Union were started, which have not yet yielded any results
'The city of Bodrum  has a mainstream sculpture park, opened in 2012 and out of town there is an art environment, created by a non-professional artist, the only site from Turkey in this weblog.
Life and works

Born in 1976, Cuma Altuntaş grew up in a Kurdish family in the small community of Kocaoglu Gemerek in the district of Sivas in Turkey. At a rather young age he already was attracted to making art and at the age of seven he made his first sculpture.

Making a sculpture already was seen in the community as rather awkward, but then, depicting people in an artwork wasn't allowed at all in the religious beliefs of his parents and the other villagers.

Looking back at his youth, Altuntaş said it wasn't a very happy one, since he felt guilty because of his drive to make sculptures, was rather depressive and had nightmares.

Growing older the conflicts with his family and the community continued. A love affair went wrong. 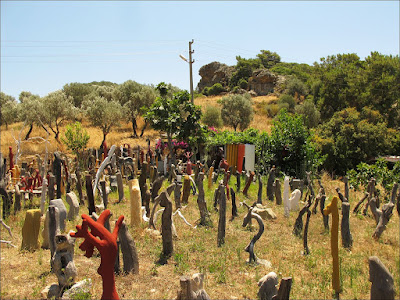 So at some point he left his place of birth, going westward, earning money by taking care of private gardens and comparable little jobs.

A young man around age thirty, a self-taught artist with an urge to make sculptures, on this piece of land he began realizing his dream. 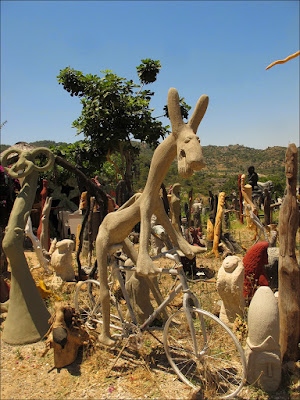 In an outburst of creativity a multitude of sculptures arose on the site, mostly life-size, often totem like, made from tree trunks, wood or concrete, which often depict strange dragon-like creatures, human faces or women.

Currently over some 2000 sculptures are on display on the site.

Working with parts of trees Altuntaş sees certain characteristics in the material, which he manipulates and accentuates, in this way expressing it's essence.

A recurrent theme in Altuntaş' work is a particular lady, of whom he says that she regularly appears in his dreams, a character that might be connected to the lost love. 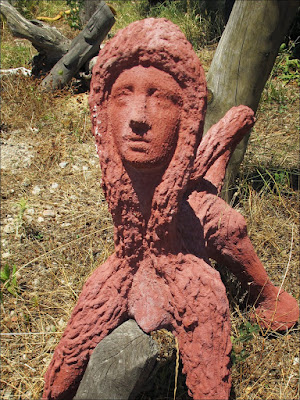 Regional newspapers and local TV have paid attention to Altuntaş' life and work, in general in a sympathetic way.

The artist will welcome visitors to the garden and he sells sculptures to interested parties.

Documentation
* Article (in English, April 2015) with a lot of pictures on the weblog of C.M. Kosemen
* Article (in Turkish, August 2013) in regional newspaper Hürriyet Yazarlar
* Interview (in English) with Altuntaş on weblog Çekişte (undated, probably 2018)