Above picture depicts the towery structures displayed in the backyard of a house in the small community of Serinyà (some 900 inhabitants) in Catalonia, Spain.

Born in 1954 in Marensa, a city near Barcelona, Salvador Sala Esquius¹ at age fourteen moved to Barcelona to take up work there. He was mainly employed as a carpenter.

His mother was artistically engaged in various ways (making paintings and ceramics) and Sala, who shared this affinity with art, apart from being a carpenter also explored what he could achieve in making paintings. It was not a success, his artwork wouldn't sell.

So he continued his career in carpentry. In 1978 he opened a workshop where he designed and made furniture on commission. He also made more experimental items he offered for sale at artisanal markets. 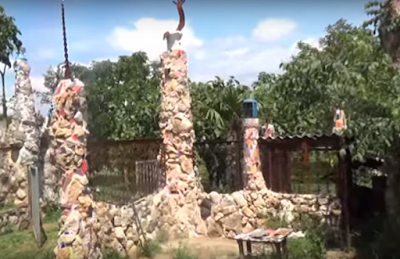 In 1997, in his early forties, Sala traveled for three months through South America, a trip that made him realise he was a rather self-contained person who could do without a lot of relations. So in 1998 he moved to the small community of Serinyà where he had acquired an old house which was so dilapidated that it cost him little.

Living alone and relatively isolated in a small village, in psychological terms he began to see his stay in Serinyà as kind of a naufragio (shipwreck), a concept that inspired him artistically to use physical material (i.e. travertine stones abundantly available in his surroundings) to provide him support and a sense of place.

Collecting these stones, piling them into columns and decorating them with shards of tile and glass (trencadis) gave him a great satisfaction. 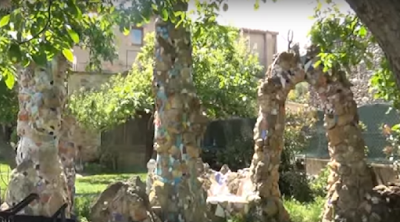 After Sala's mother died (in 2003) he inherited a house which he sold. This earned him a sum of money that allowed him to be free of daily work for a considerable time, a time span he used to continue creating decorated towers. 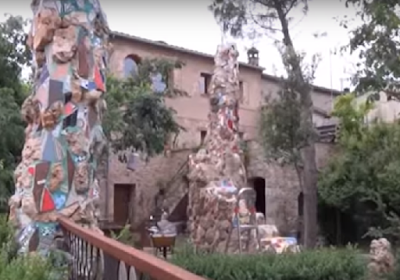 Most columns were arranged in the garden directly behind the house. The largest one is the Torre de Babel (Tower of Babel), which rises 7 meters (23 ft) high on a climbable base which is 3 meters (10 ft) high. This artwork not only has mosaics, but it is also decorated with various found objects, including some that he received as gifts from friends.

Another eye-catching construction in the backyard is a grouping of four columns interconnected with decorated benches.

One of the long sides of the garden is bordered by a 50 meters (154 ft) long fence, which is embellished with some 4500 colorful aluminium cans.


The opposite long side of the garden has a stone wall, composed of various creative structures

In 2015, when the first version of this post was published, Sala Esquius had resumed his activities in Barcelona in the area of carpentry.
Situation late 2021 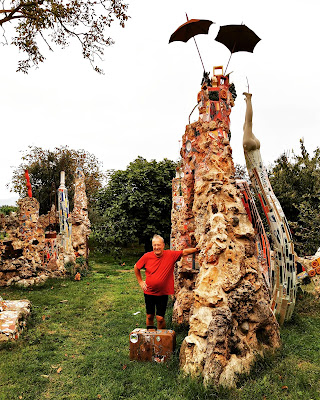 The picture above and the one below, made in October 2021 by Tiramisu Bootfighter, who traveled through Spain in the context of his project La Valise, Galerie Ambulante, shows that at that time both Sala Esquius and the creations were in good condition. 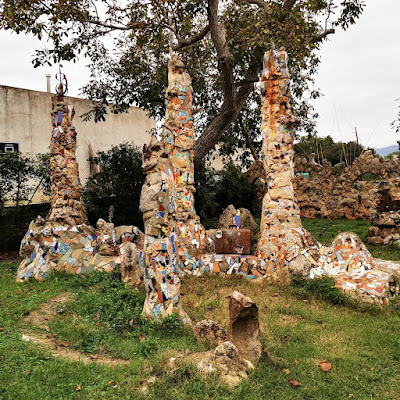 Documentation
* Sala's personal website (2014) with an explanation and photographs of the various creations arranged by type
* Article by Jo Farb Hernandez on the website of SPACES. This is an abridged version of her scholarly review of the site in: Jo Farb Hernandez, Singular Spaces. From the Eccentric to the Extraordinary in Spanish Art Environments, Seattle (San José State University), 2013, pp. 158 - 163
Video
* Scenes of the site on the video by Sergio Flaquer Carraras about the Província de Girona (YouTube. 2020), starts at 30'31" (cannot be embedded here)
¹  note
Jo Farb Hernandez book about Spanish art environments is the most informative source about Sala Esquius' art environment, so I like to acknowledge that this post for a large part draws upon Jo's research