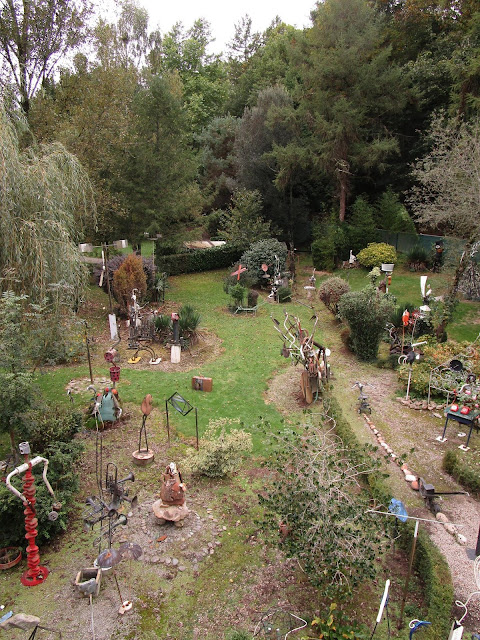 Insert Récup'art  in a internet search engine and you will get over half a million of hits which mainly refer to activities in France in the field of making artistic creations from recuperated material.

Jean-Pierre Moreau is among the half a million results. 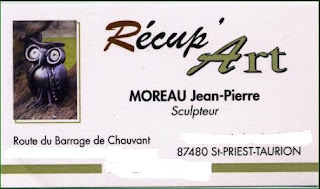 Born in 1941, Jean-Pierre Moreau in his professional life was active in a factory in Limoges as a welder and as operator of a lathe and of a milling machine. In these technical jobs he learned to work with metal and iron and became acquainted with the specific characteristics of this materials. 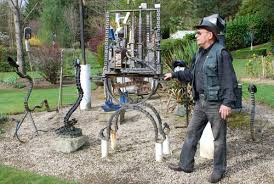 In 2000, some years before he retired (2004), without any prior artistic training, Moreau began making installations and sculptures from excess iron and other material. He made life-size items, such as the installation in above picture.and small ones, such as the insect depicted below. 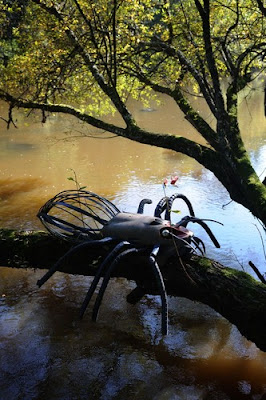 Currently, Moreau has produced some 300 sculptures and installations, which are displayed on a plot of land of 5000 m² (1.2 acres) he owns, named Récup'art and located near the house where he lives.

Because of the carefully maintained greenery and many trees the site has the allure of a park and Moreau likes to welcome visitors and show them around. Moreau's park is located in the small rural community of Saint-Priest-Taurion (some 2700 inhabitants) near the city of Limoges in the south-west of France. 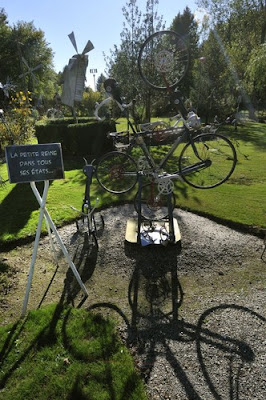 Visitors will see all kind of real or imaginary animals and monsters, strange machines, robots, and installations like a sailboat or a windturbine, all made from recuperated items.

As can be seen in above picture, the park also houses a mill. Here Moreau keeps his paintings made in the style of painters he admires, such as Picasso, Dali or Giacometti,

To date this art environment  hasn't raised much publicity among those interested in outsider art. It is mentioned in some regional touristic websites, a local journal and an occasional weblog.