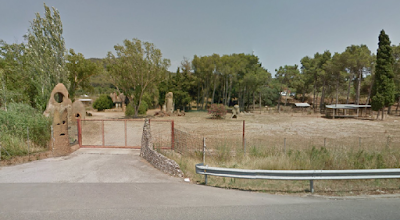 view from the road


Formerly known as Zoo Emporda (Zoo of the Emporda region) this art environment currently is named Espai singular Maciá (Maciá's singular space) after its founder Antoni Maciá Cassany (1918-2007), who realized a variety of single-handedly built structures on the property ¹. 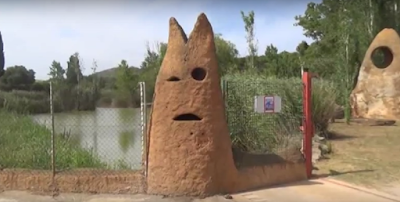 structure on the left side of the entrance
this colored picture and the next ones (spring 2014) screenprints from the video by
Serflac (see documentation), published here in agreement with the author

Born in peasant family in Vic, a centuries-old city in Catalonia (Spain), Maciá at age sixteen began working at a local cement factory. Two years later he was drafted in the army. The Spanish Civil had begun and Maciá had to take part in the fighting. 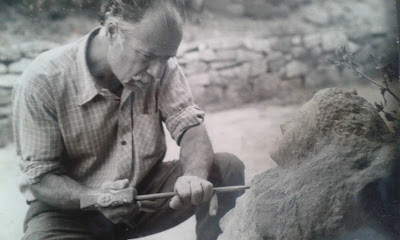 He was wounded and returned to Vic to recover from his injuries. The city of Vic is a center of ecclesiastical activities and of producing saint statuettes. Maybe inspired by this activity, the young man became interested in modelling in clay. He succeeded in getting permission to follow art lessons at the local School of  Arts without formally registering and soon showed an innate skill in modelling, which made him decide to settle as a sculptor in Barcelona.

Here at first he earned a living for himself and Josefa Rovira Olmo he had married in 1942, by making and selling figurines of clay. Later he got a job as an assistant of a famous sculptor, but gradually he felt hampered in his development as an artist. Fallen into debt because of an exposition of his work at his own expense, in 1955 he moved to Begur a community along the Costa Brava.

It was the era of the initial development of tourism along the Spanish Mediterranean coast, as promoted by the government, and Maciá went to work in the field of building hotels. 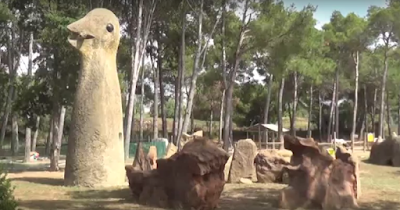 In 1967 Maciá bought a plot of land of some 17.000 m² (4.2 acres) in the community of Regencós where the family went to live. Although located in the countryside, Maciá probably realized that he could engage here in the various activities he wanted to pursue in life, acting in his own way and own spirit, integrating gardening, animal husbandry, architecture and sculpture. 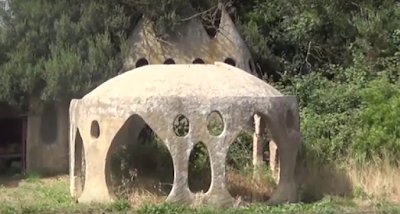 the "rotunda", an open aviary, as well as the
building with the three-pointed roof behind

Step by step animals were added to the site, domestic ones such as those living on a farm, but also exotic ones, such as monkeys and an emu.

To give shelter to these animals Maciá designed structures in a specific architectonic idiom, which he single-handedly constructed. He made these structures by piling cemented stones into the desired form and then covering the resulting model with a layer of cement, both internally and externally.

In particular in the 1970's Maciá exerted a lot of energy in transforming the site into an art environment/zoo.

left the "Caja de instrumente musical",
in the middle the "Oruga"

The ensemble of structures on the left side in above picture, the Caja de instrumente musical. is a small and bare version of a never realized larger structure Maciá dreamed about. His idea was that it would produce musical sounds generated by a machinery activated by streaming water, all items beautifully illuminated.

The sculpture in the middle of above picture, La Oruga,  is the icon of the site. Its highest point rising some four meters (13 ft) from the ground, the construction was meant to be climbed by visitors so that they could be photographed once above.

a peasant and a mermaid

The site has only a few realistic sculptures of animals or humans. There is a Catalan peasant as in above picture, flanked by a mermaid, an ensemble still present at the premises.

Maciá made a number of such sculptures, but these were primarily intended to sell to visitors or to people who were interested in his artistic work. Since no records were kept, its unknown how many sculptures he sold and where they went. 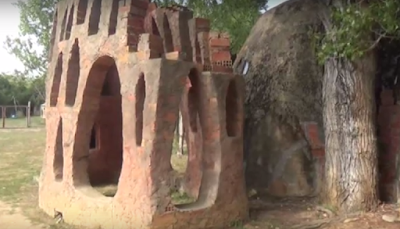 a structure meant to house monkeys, but never used a such
\


From 2007 on the site has remained closed for a number of years. It must have suffered degradation.

However, meanwhile it has reopened as is evident from the video that was made in the spring of 2014, which shows a maintained site. Currently there also is a website that reports about activities which took place in 2015, such as workshops in dance, music and drawing, concerts and dance performances.

* Website Espai singular Maciá (in Spanish, English and French
*  The site got a scholarly review in: Jo Farb Hernandez, Singular Spaces. From the Eccentric to the Extraordinary in Spanish Art Environments, Seattle (Raw Vision, SPACES, San José State University), 2013, pp 316-325 (An abridged version is available on the website of SPACES)
* Scenes of the site (2014) on the Provincia de Girona (Catalunya) trip video by Serflac (YouTube,
starts at 18.50, cannot be embedded here)

note
¹  to my knowledge the only source about this site in the public domain is the review by Jo Farb Hernandez (see documentation), so I acknowledge that this post relies on Jo's research

on the road between Regencós and Pals
after 2015 no activities have been reported
Posted by henk van es at 12:01 PM