A house facing the beach in Guainos Bajos, part of Adra, a community of Almería in Andalucía, Spain, has a front garden which is fully decorated with structures embellished with seashells, shapely stones, plastic figures and various plates fitted with proverbs.

Her full name is María Ascensión Rodríguez Rodríguez. Born in 1936 she married in 1956 and had three children. All her life she was interested in art, which she gave way by collecting small sculpted items she bought in local shops.

Around age 50, in the 1980's, this interest got a new twist when she began adding decorations to her garden, a plot of some 60 m² (646 square feet) that separates the house from the beach. 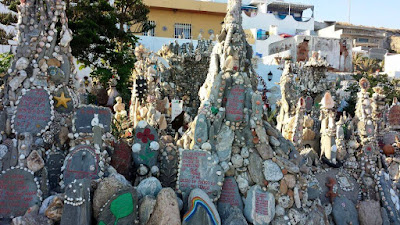 People who create shell decorated items in general use a cement mix to secure the shells. Maria Rodriguez prepared the cement herself by using sand from the beach mixed with cement powder and water.

The base on which the shells and other elements were attached mostly had a pyramidal shape, which gave the collection its own characteristic appearance. 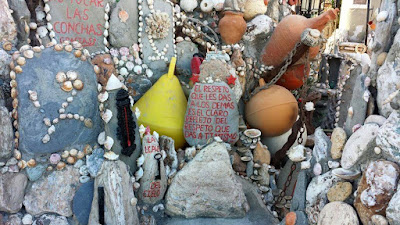 Rodriguez regularly patrolled the beach to collect additional decorative material, not looking for specific shells but just gathering what she encountered and what she liked..

Apart from a variety of self-collected sea-shells and other found items, Rodriguez` creation is characterized by plates that are provided with texts, such as proverbs, personal messages, warnings and other sayings.

Here are some examples: 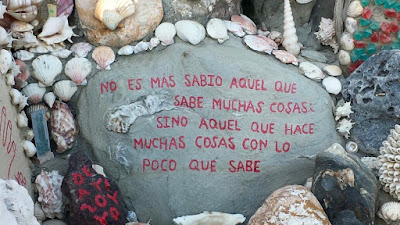 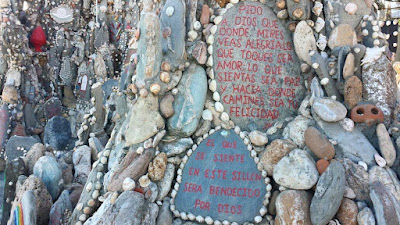 The text on the upper plate reads


The lower plate has a text that refers to a seat which is included in the structure:

And finally this example 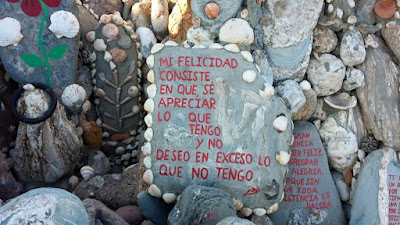 Maria Rodriguez passed away September 26, 2017. It remains to be seen what in the future will happen with her art environment.