The French community of Saint-Coulomb, located along the Baye de Saint Michel in Brittany, had its own attraction park, a rather special site because it was made from recuperated materials by a local inhabitant,  In 2017 the site was closed.

Born in 1929, Fernand Chapet at age 14 went to work. He was active in the car industry and in the marines as an electrician.

Once retired, in the late 1990s he began transforming a meadow-like area near his house into a Champ des attractions, adding various self-constructed items with the common characteristic that they can make movements.

In French such creations are designated as automates, a term that refers to a device mimicking the movements of a living being. In the terminology of this blog they could be designated as animated creations. 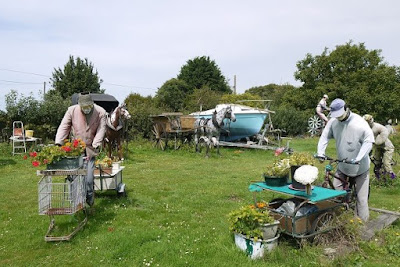 In the course of some twenty years Chapet made around fifty of such creations.

A cycling enthusiast in his youth, Chapet made various creations in which old bikes have been processed, as in the picture below. 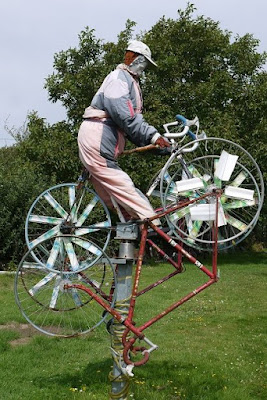 But Chapet also paid attention to local and regional major events, such as the opening in 2017 of a high speed train link from Paris to Saint Malo. a train à grande vitesse (TGV).

Maybe that's why the regional train from Saint Malo to Cancale -pictured below- had the abbreviation TPV (train à petite vitesse ?). 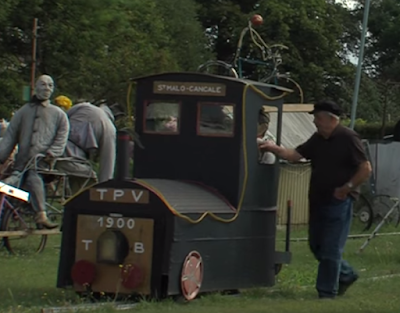 In making his creations Chapet devoted most attention to the technical aspects.

The life-size dolls that depict people, were dressed in discarded clothing and to portray the faces Chapet used masks, what according to him was the toughest part to do, because where he lives these are not so easy to obtain. 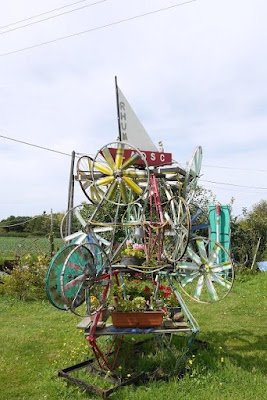 The site derived its charm from the movements of the creations that populate it, a capacity that was especially been devised by Chapet to amuse people.

Located in a tourist area, especially in summer the Parc des automates attracted numerous visitors indeed.
In 2017 the site has been closed
In 2017, Chapet suffered a heart attack at the age of 88. Weakened by this, he has decided to close the site and sell all creations.