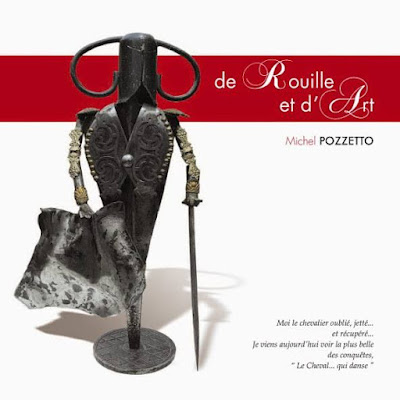 In Michel Pozzetto's sculpture garden just a part of his oeuvre is displayed. Since this garden has no specific name, I designate this post with the title of a booklet (published September 2014) with an introduction by Pozzetto and pictures of a selection of his creations, De Rouille et d'Art (Rust and art), a well chosen title indeed for Pozzetto's artistic work.

Born in 1944 in the community Ambert in the Puy de Dome area in France, Michel Pozzetto when grown up got a job as a cook for shipping companies.

Around 1995, when retired and living in the southern French community Paluds-de-Noves (Bouches-du-Rhône), on flea markets and junk shops he began buying old disused tools as used by farmers, miners and other laborers in former times before industrialization of production took place.

,
Pozzetto transformed these tools into sculptures, often by just adding faces he made himself.

These creations are partly displayed in the garden around his house, for another part they are exposed inside the house. 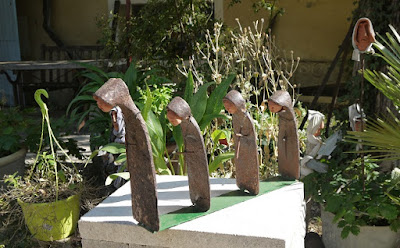 It is almost incredible to see how by a simple treatment these earlier tools get a completely different look.

Pozzetto will use his material just as it is, at most adding faces or hands, but using no paint or other ways of decorating. His message is a philosophic one: to show that these currently forgotten and discarded instruments, once so important for mankind, can get a new life, a transformation that could also occur in everyone's daily life. 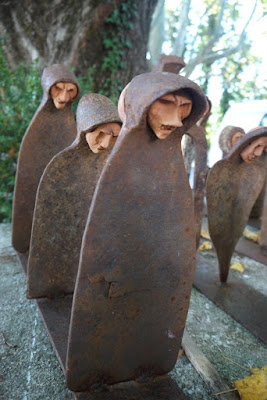 In the booklet De rouille et d'art Pozzetto addresses his readers in this way:

Je ne veux pas vous donner de leçon, je voudrais qu’à l’avenir vous regardiez les outils différemment et que dans les moments difficiles de la vie, mis en état de rouille, quelqu’un peut vous ramasser pour vous redonner la vie. (I do not want to teach you a lesson, I would like that in the future you look in another way to tools and that in difficult moments of life, when you are in a rusting condition, someone can pick you up to bring you back to life). 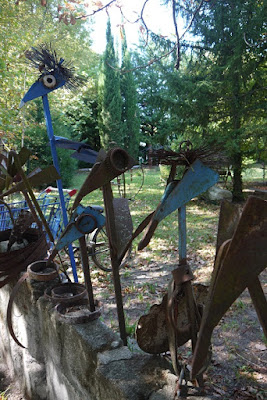 Pozzetto often adds together some smaller identical items into an ensemble, as in the group of monks (or the like) above, what gives a special appearance.

But he also combines various tools in an installation, as in above sculptures displayed on a wall. 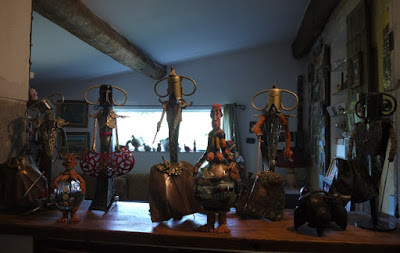 Pozzetto is a prolific worker, who meanwhile has transformed a large quantity of old tools into stand alone sculptures, ensembles or installations. Currently the house's interior and its garden have an abundance of his creations. 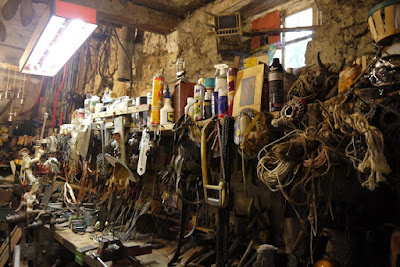 Above picture shows Pozzetto's workshop with its vast collection of materials and equipment.

To flee poverty Pozzetto's grand parents in the early years of the 20th century, as many other Italians did, migrated to France. In memory of this migration a sculpted ensemble made by Pozzetto was placed in the center of the community Calcinaia in Tuscany. 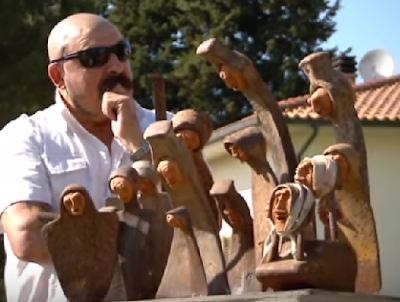 The unveiling in May 2014 was reported on a video produced by the municipality (see documentation).

Exhibition of a nativity scene

Christmas cribs form a theme to Pozzetto's heart and he has depicted these scenes a number of times.

Documentation
* Michel Pozzetto, De rouille et d'art, Paluds-de-Noves (Antidote solutions graphiques), 2014
* In her weblog Sophie Lepetit has devoted considerable attention to Pozzetto and his creations:
---sculptures in the garden (2/10/2015)
---workshop and interior (15/10/2015)
---more sculptures outdoors (16/10/2015)
---and once more a series of recent creations (16/10/2016)
* Article in the weblog L'Internationale InterstiCielle jan 2016, which starts from the expo in Musée Chabaud to review Pozetto's oeuvre and artistic position.

Video
* Video of the unveiling of the memorial in Calcinaia (Municipality of Calcinaia, 5'20", YouTube, June 2014)