Above picture depicts the Saint-Jean-Baptiste church of Courtillers as reconstructed in miniature by Eugène Choffat (1929-2019), resident of this small rural community of some 600 people in the Pays de la Loire in western France ¹.

Born in 1929, Choffat in his professional life had a job as a service technician in a factory in the neighboring town Sablé-sur-Charte. He retired from this job in 1989 at age 60.

In 1968 when he was in his late thirties, he began making replicas from concrete of buildings in his region, an activity he continued for some forty years. This resulted in a miniature village of some twelve various replicas, supplemented with over a hundred little characters. 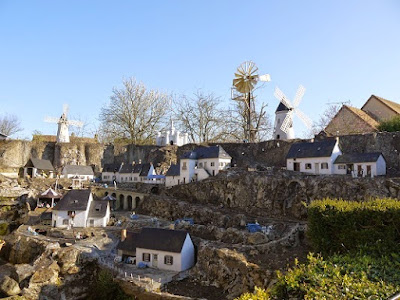 Choffat displayed the replicas, all more or less to scale, in the garden of his house in a landscaped setting with specific elements that support the appearance of the whole, such as the viaduct in above picture. 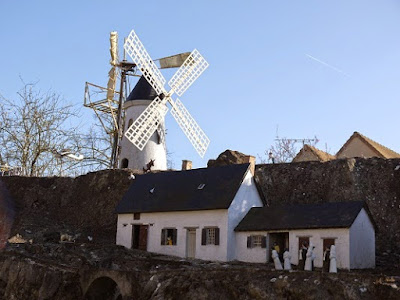 In my opinion, the charm of this art environment to a large extent  is in the black and white color scheme of the unadorned replicas.

By a complex system of hidden ropes, pulleys and motors, all made with technical ingenuity from discarded home appliances, various elements of the site, such as sails, vehicles and people would get into motion if visitors throw a coin into an appropriate slot.

In his 80s Choffat ended making replicas, but he continued to maintain the site and welcome eventual visitors. He passed away at age 90 on July 15, 2019.

It remains to be seen what the future of this site will be.

Documentation
* Article (April 2015, by Michel Leroux) on the weblog les grigris de Sophie
* Article (July 26, 2019) on the occasion of Choffat's death on French news website Actu
* Entry with a series of photos by Francis David on the website Habitants-Paysagistes (Lille Art Museum)

note
¹  Apart from Francis David's photo series and the obituary on the Actu website, is the article on Sophie Lepetit's weblog (see documentation) one of the few sources on the internet about this art environment, so with pleasure I acknowledge that the data in above entry were derived from Michel Leroux' text in that blog