The rue des Ciseaux in Paris is a short, small street that on one side ends at the Boulevard Saint-Germain, just where the Church of Saint-Germain-des-Prés, which dates from the 6th century,  faces the café Les Deux Magots, a spot ever with the reputation of being the meeting place of Paris' literary and intellectual elite.

Only recently (autumn 2015) it has become known that in this street, right in the centre of Paris, an apartment was transformed into an art environment ¹. 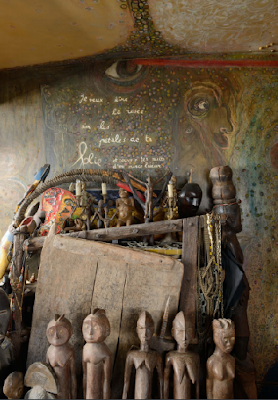 Professor of physics at the Faculty of Sciences Paris 7, in 1975 he bought the apartment in the rue des Ciseaux

From the late 1970s on, bit by bit, he has decorated the apartment, working over and over again to accomplish it, but although this activity must have played an important role in his life, he was not very talkative about it. 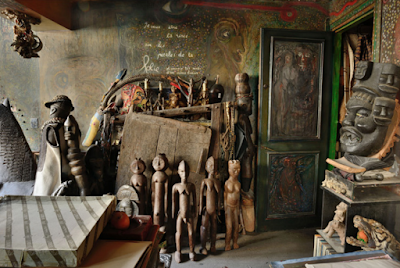 In the course of the years Allanche has actually painted all available surfaces of the apartment, not just the walls, but also the ceilings, the floors, cabinet doors and step treads. Moreover he also displayed the many African and Indian sculptures he had collected when he was teaching as a professor in Congo and Burkina Fasso (1989-1995).

The multicolored paintings have whimsical motives, sometimes formed by a large number of dots or small circles, combined with vaguely represented people and animals. In some places texts are arranged and on one of the doors his surname appears.

Considering the entire set of paintings one gets the impression that they primarily have a decorative nature (such as Asalanche, London), and are not intended to give expression to personal experiences (such as Bonaria Manca, Italy) or particular events or circumstances (such as Polina Rayko, Ukraine) and Wiersma, Netherlands), this irrespective of the occasionally added texts.

Such a view is supported by a remark in one of Allanche's notebooks, where he says that he has managed to show the intimate relationship between musical harmony and colors. 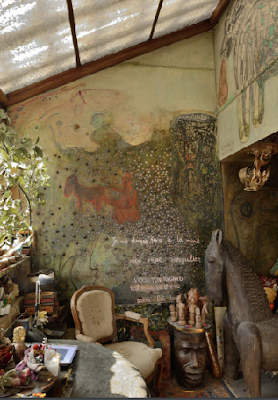 To get an impression of Allanche's texts on the walls, here is how the one on the the wall pictured above reads:

Allanche's legacy also includes a number of gouaches and oil paintings in the same style as the wall paintings. They mainly date from the late 1970s and maybe were made as designs for (parts of) his wall paintings ².

And then he left a large number of notebooks. which include personal remarks and aphorisms, but also hundreds of pages with sequences of numbers, which has to do with a passion for gambling and his endeavor (he was a professor of physics) to model disorder.

Allanche died in hospital in August 2015 from an incurable disease.

It wasn't realistic to assume that Allanche's small and indoor situated apartment could be saved as kind of a museum for the general public, so it has kept it's function as a private apartment. Removable parts of this art environment have been stored. In the future they might become part of the collection of a French museum. 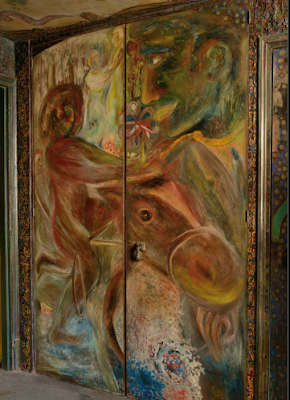 Notes
¹  To my knowledge the only available source about Allanche's art environment as such is the brochure by Hervé Perdriolle, so I like to acknowledge that the data in this post are derived from this brochure (interpretations are my responsibility)
²  Galerie Hervé Perdriolle has presented a number of Allanche's loose-leaf works on the Outsider Art Fair in New York in January 2016. Website Artspace (January 22, 2016) wrote about Allanche in an article reviewing the art fair