It can happen to any of us. In a piece of wood or a branch of a tree one recognizes a human figure, an animal or some object. Most people leave it at that, but some may become so interested that they begin to collect and adapt such small wooden items.

This happened to Émile Chaudron (1927-2003). Born in the small community of Prez-sous-Lafauche, located in the north-west of France, he became a woodcarver by profession.

In 1960 he recognized the head of a dog in a branch of a cherry tree from his garden. This aroused his interest and he began looking around for comparable branches. In this way he built a collection that ultimately would include some 400 items.

Chaudron regarded the collection as a single entity and he was not prepared to sell stand alone items. He apparently considered his creations as inextricably linked to him and his habitat.

In preparing branches for inclusion in the collection, Chaudron left them almost entirely in their original state. The only adjustments he indulged, were carving a head with a specific expression and adding some attributes that gave support to the depicted character, like in above scene he added faces, a hat and pitchforks.

The collection mainly includes animals and there are several scenes that depict the in France well-known fables of Lafontaine. 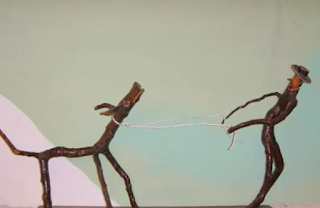 Already in 1961 Chaudron had such a number of items available, that he could organize a small exposition in Chaumont, the capital of the Haute Marne department, not far from Prez-sous-Lafauche.
Maybe he feared people would make fun of his passion for these small wooden items, but his characters were popular with the public and the exposition was a success.

So in 1963 Chaudron opened a small museum named Zoo de Bois in Orquevaux, a community of some 80 inhabitants, close to his birthplace Prez-sous-Lafauche.


It's a community that in summer is visited by tourists who are attracted by the natural beauty of the area, and the museum didn't go unnoticed by holidaymakers.

In 1977 the museum was relocated to Prez-sous-Lafauche. 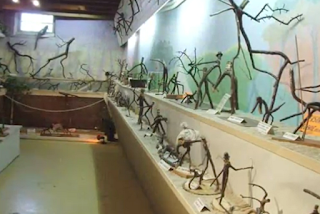 After Chaudron died in 2003, the family approached the local association Amis du Château de Lafauche, a group of volunteers, active in promoting the local castle. This association agreed to take over the management of the Zoo de bois branchés.

After a relocation to the nearby village Lafauche, in May 2016 the museum was reopened. Together with photos and models of the local castle, Chaudron's collection currently can be seen in a room in the town hall. 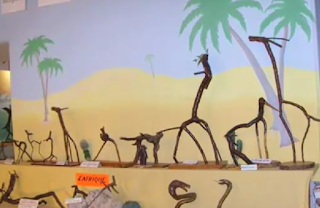