The recently (2015) published book about art environments in the north of France, d'Étonnants jardins en Nord-Pas de Calais (Amazing gardens in Nord-Pas de Calais) devotes two pages to Concetta and Michele Sassano's art environment in Wingles. The editors of the book say that notwithstanding various attempts, they couldn't get into contact with the couple to talk about their creation, so they rely on the few already available sources and pictures to present this site.
Life and works

Biographic information about the couple is limited. According to the article by M.P. Griffon (see documentation), Concetta was at age 66 in 2002 and she moved from Italy to France in 1957. So she was born around 1936 and she moved to France at around age 21.

In 2008 the couple participated actively in an interview, as can be seen in the video Mon Louvre à moi, but if currently (2016) they are around age 80, this might explain they do not feel like an interview any more. 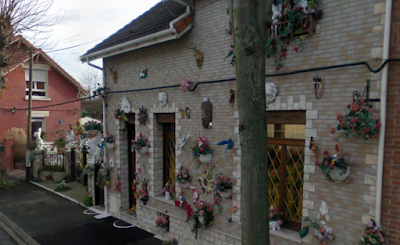 Concetta and Michele Sassano spent over fifty years of their lifes to creating and maintaining their art environment. And it virtually took all their free time. As Concetta said when interviewed in 2002:

"We went five or six times on holiday in forty-six years, but I'm glad.  I'm proud of what I did. I am happy when people stop to watch"

Over these years the garden has been adorned with a very large number of commercially available statues, such as an Indian of some two meters high, an ancient Greek athlete, a Venus of Milo, but also a Betty Boop, an Elvis Presley, a Marilyn Monroe, and of course a large variety of gnomes, plastic flowers, vases and all kinds of adornments.

If required Michele paints the items in appropriate colors, like Concetta provides them with clothing.

This decorated garden is special. It's not an art environment in the in this blog usual sense, since its components haven't been single-handedly created by its maker(s).

However, the site in it's overall appearance demonstrates a specific original quality because of the boisterous, festive quantity of artifacts, which can be appreciated as a creative adventure as such.