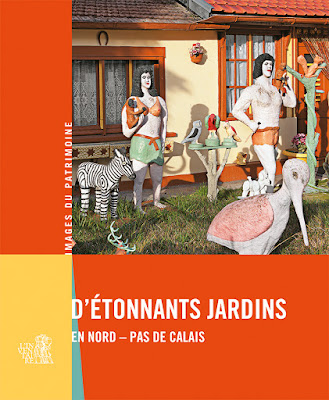 The Service du Patrimoine culturel de la région Nord-Pas de Calais (Department of cultural heritage Nord-Pas de Calais) in November 2015 has published a book which presents the results of a research project designed to identify and describe art environments in the area.

For a long time this area has been dominated by the mining industry and some fifteen of the twenty creators of art environments presented in the book, were employed by a mining company.

Among the creators of art environments portrayed in the book are those who are already known in the field, such as Charles Pecqueur (1908-1991) from Ruitz, who inter alia decorated a wall in his backyard with the story of Snow White, a site currently still extant, but in decay, the frescoes gradually fading away.

Also somewhat known is René Pecqueur (1933-2003) who lived in Louches and who embellished the outdoor space of his house with tree-like structures with brightly colored scenes, a site that was demolished after he died,

This self-taught artist also has a separate essay in the introductory part of the book, contributed by Michel Cabal.

The sculpture garden of Léon Evangelaire (b 1925) from Pont-à-Vendin, which is portrayed on the cover of the book, is also known in the field of art environments. It is kind of a small zoo featuring Tarzan and Jane.

Another well known site presented in this book is the one by Rémy Callot (1926-2001), who created mosaics on the inside of the fences surrounding his home in Carvin, creations that were discovered only when his house for traffic reasons had to be demolished in 2006, which however partly was stopped in time.

In the introductory section of the book, the story of the discovery is related by Tiphaine Kempka.

Two more art environments are presented in this book which are familiar to those interested in the field. First the castlelike house realized in Berck-sur-Mer by Joseph Meyer (1914-?), currently still existing.

And finally, the Ferme aux avions by Arthur Vanabelle (1922-2014), a site much discussed recently, which after the death of its creator was sold to a private party, whereby it remains to be seen what happens with the various decorative constructions.

But then, the inventory section of the book has some twelve art environments made by people whose names are rather unknown in today's field of art environments, some because they wish to remain anonymous, while others might have been mentioned in old publications but are passed by in today's digital forms of publicity.

Just some names: Jean Cathelain (1932-2011) with his small sculpture garden in Billy-Montigny, Philippe Hermez (b. 1964) with his monde fantastique in Meurchin, Robert Lemaire (1924-2010) and his jardin aux girouettes in Sains-en-Gobelle and Jean Poteau (1947-2010) with his havre du pêcheur in Rouvroy.

In addition to the above already mentioned essays in the first part of the book, the introductory section also has contributions that deal with general aspects of art environments, such as the general review of art environments in France by Savine Faupin and Christophe Boulanger (LaM Museum Lille), an article by Laure Chavanne about the preservation of Fernand Chatelain's  and Jean Linard's art environments, a description of the design of the research project by Nathalie van Bost and an analysis of the function of the garden in the collective housing projects (cités minières) in the mining area by Marie Patou and Nicolas Selvan.

This is an interesting and informative publication. For all I know it is the first time that a number of art environments is presented in the context of the social and cultural characteristics of a particular region. And, especially now that the mining area in northern France in 2012 was added to UNESCO's world heritage list, it is an excellent initiative to highlight the cultural contribution made by self-taught artists, and capture in pictures and texts their vulnerable creations that seldom can withstand the test of time