It's an ordinary house in an ordinary street in the community of Meurchin in northern France, but once inside and in the backyard as if by magic one enters a fantastic world.

Born in 1964, Hermez at a young age already was fascinated by transforming things, for example transforming a piece of wood into a giant clothespin.

He became a plumber and carpenter and currently he is working for EDF, the French electricity company. His fascination with transforming things has persisted, but -hopefully- is restricted to his spare time.

In 2001 he adressed this fascination in a large scale way when he began transforming the backyard of his house into a fantasy garden, which ultimately would become an art environment.

First he made kind of dragon which could spit fire.

Then he constructed an open kiosk populated with two plastic skeletons and a witch. 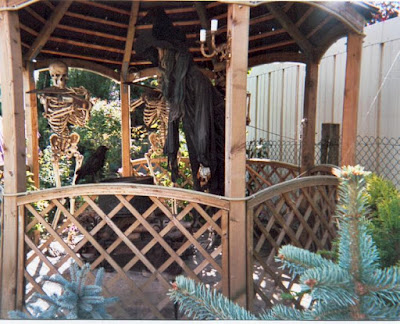 Already in these first creations the specific characteristics of this art environment are discernible, namely that these creations can make movements or otherwise may come in motion and also that they mostly are somewhat ghostly and/or fantastic.

The fantastic aspect does not occur in the next projects Hermez took up, a very large cascade along one of the walls of the garden (as in below picture) and a bassin, but there sure is movement, since the waterfall splashes water and the bassin has a rotating paddle wheel. 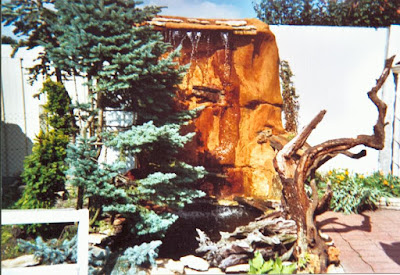 However, the fantastic aspect returns when Hermez subsequently from tree stumps he gathered in a forest, crafted a tree with illuminated eyes and a mouth that makes speech movements and produces sounds.

One would think of Tolkien's Ents, but Hermez was especially under the spell of Harry Potter.

In 2011 he enriched the garden with a self-constructed cabin, located  along the Allée Harry Potter (Harry Potter Alley).

This cabin nowadays has a large collection of all kinds of creations that can be associated with Harry Potter's world, such as a large owl, a ghostly apparition floating through the room and a self-writing goose quill. 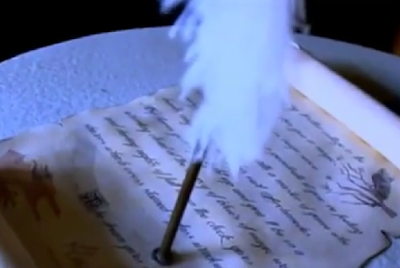 Hermez has also made tabletop miniature scenes, such as one that represents an orchestra in evening dress that can come alive, and another one that shows skaters doing figures on an ice rink.

These creations, together with other well-dressed, movable characters, are located in the house, which in this way also has a number of fantastic stagings.

All together, a fantastic world.....