This art environment was a hidden treasure until it was discovered after its author had died and the city wanted to demolish house and garden to construct a roundabout.

Rémy Callot (1926-2001) lived in the industrious community of Carvin, in the north of France, where had an administrative function at the office of a mining company.

Due to an accident in his youth he had lost his left forearm, but this didn't stop him making paintings and pottery as a self-taught artist. 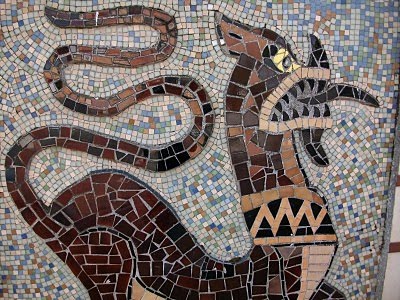 When Callot in 1966 moved into a house, actually a kind of barrack, with a plot of land of some 400 m² at the rue Michel Montaigne in Carvin, he surrounded the site with a palisade and then, in the late 1980s, when retired, he began decorating the enclosure with colorful frescoes and mosaics.

It took him various years to complete this project, which resulted in 19 decorated panels with a total surface of 56 m².

After Callot died in 2001 his house remained uninhabited and his art environment remained unnoticed. 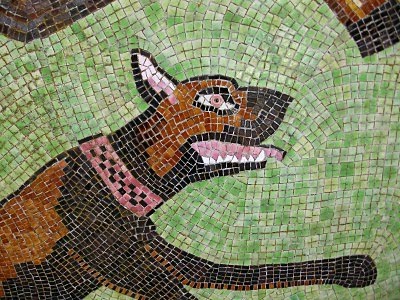 However, this changed in 2006, when the city had developed plans for a new layout of the street to make a roundabout (or maybe a parking). At the moment the house had to be removed, the frescoes were discovered. The authorities made the wise decision to postpone the public works and preserve the artwork.

The city's cultural center, Centre Jean Eiffel, was actively involved in this decision. 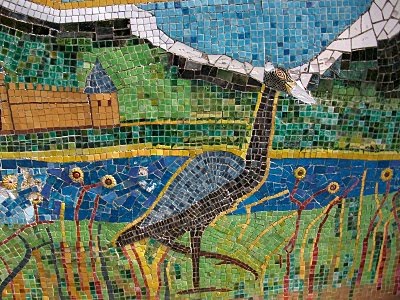 Currently the frescoes are on display on the enclosure walls of Callot's plot. Kind of an open air exhibition.

The Cercle des amis de Rémy Callot, established in November 2008, started a discussion to generate ideas about the future of the site. Maybe it could become kind of a musée jardin, an open air museum.

It would take time to develop plans, but end November 2013 the newspaper Voix du Nord reported that a plan had been made to transform the site into an artist's residence with a workshop, annex to a room for conferences, an exposition room and a café. Now funds have to be acquired.

It turns out that some two hundred ceramic creations were part of his legacy which was donated to the city by the family. This collection, mostly in a rather good condition, gives a good impression of Callot's artistic potential.

Pictures of exposed ceramics on the FB-page of the Cercle des Amis de Rémy Callot (Group of Friends).

Renovation of some mosaics and the area around the site

In March 2020 it was announced that the city will enhance the area around the site, which will become a Rémy Callot Square, by transforming it into a public square, enhanced by adding vegetation and installing benches and tables. The project includes the restoration of mosaics that were badly damaged during the last two winters.

Rémy Callot
Palisade with mosaics
Carvin, dept Pas de Calais, region Hauts-de-France,  France
on the corner of the rue de la Gare and the rue Michel Montaigne
mosaics can be seen from the street
Posted by henk van es at 2:31 PM