Located in the city of Messina, on the isle of Sicily,  La Casa del Cavaliere has been one of Italy's outstanding art environments. Unfortunately a large part of the site has been demolished because of the construction of a parking lot. Only the facade of this once so wonderful art environment has been left.

Giovanni Cammarata (1914-2002) after his primary education became a mason. He had to join the military during WWII and then in 1947 he settled in Messina, where he began a business in the production of garden ornaments made from concrete.

His company was located in Maregrosso, an industrial area of Messina along the sea front, but without the allure one would expect of such a location at the seaside.

In 1957 Cammarata decided to add an artistic element to his daily activities by making ornaments decorated with mosaic and shells. This was the beginning of a lifelong creative activity, which in the 1970s became his full time job.

Eventually Cammarata's efforts would result in a house and a garden completely covered with mosaic and fully decorated with sculptures and ornaments.

The exterior wall along the street had high reliefs which depicted all kinds of historical scenes, such as Hannibal crossing the Alps, Egyptian scenes and fighting knights.

There was a garden at the interior which included a variety of mosaics and a lot of sculptures impersonating personalities from fairies such as Snow White and movies such as Laurel & Hardy and King Kong. 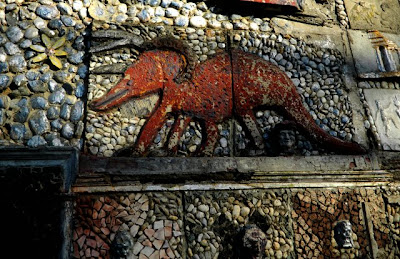 Decay of the creation

After Giovanni Cammarata died in 2002, the site gradually was vandalized and many objects were stolen.


As a protest against further decay and demolition, in 2007 a local manifestation was organised.

video (3'19") on YouTube about cleaning the site in 2007,
Gabriel Savesta singing, video made by "Machine Works"
A group of artists and friends of the site campaigned to preserve Cammarata's art environment. The issue was that the grounds of and around the site in the context of local planning had been indicated to become a parking place for a shopping mall.

However, in 2007 Messina's authorities decided in favor of the demolition of the garden in order to make space for that parking.


Currently only the part of the site which was located on public territory has been preserved, namely mainly the facade of the structure, separated from the street by a fence.
Meanwhile (2021) the site is surrounded by a concrete wall to prevent further vandalism. This also in anticipation of plans to renovate what remains of Cammarata's creation.

In recent years interest in and appreciation of this ever so unique art environment has greatly increased. And the parking lot still is just what it was meant to be: an ordinary parking lot.

Documentation/more pictures
* Facebook page Zonacammarata
* Article on SPACES website
* The online edition of the Osservatorio Outsider Art, nr 4, March 2012 has articles about the site by Gabriele Mina and Pier Paolo Zampieri (in Italian, pictures of the artwork, but also of the situation of the remainder of the site in the midst of the commercial area. Must see!)
* Antonello Manzano, set of pictures (2012) on Flickr
* Cammarata's creation is discussed in the context of other Sicilian sites in a lecture by Eva di Stefano for the 2013 general meeting of the European Outsider Art Association on the topic "Who owns outsider art?" (reprint in OEE texts)
Videos
* This video by Glifo Edzioni (1'27", YouTube, uploaded June 2014) gives a good impression of the exterior wall, filmed through the protecting fence.

* On the video below (YouTube, 2019) Pier Paolo Zampieri gives a public lecture about the site (in Italian, with very interesting aerial photos of the site)