Jean Smilowski (1927-1989) was the son of immigrants, who in 1923 migrated from Poland to France and settled in Lille, a city in northern France.

Because of financial problems the family became homeless, so from 1943 on they found shelter in kind of a cabin in the outskirts of the city in the area of the fortresses of Vauban.

In 1960 because of an accident at his job Smilowski became invalid. He had to stop working and to have something to do, he began making paintings, using simple materials such as Ripolin.

After his parents had died Smilowski lived alone in the cabin, which he gradually transformed into his own imaginary environment by decorating it's walls with frescoes and adding objects he constructed himself, such as models of warplanes.

In creating his own world Smilowski had a variety of themes, like scenes from western movies (with Sitting Bull), love stories (Ramona), the military, heaven and paradise ....


Smilowski lived a solitary life and probably no one knew about his creative activities.

The local authorities by surprise learned about his artworks when in 1985 urban renewal of the area where Smilowski lived, implied that the cabin had to be removed. 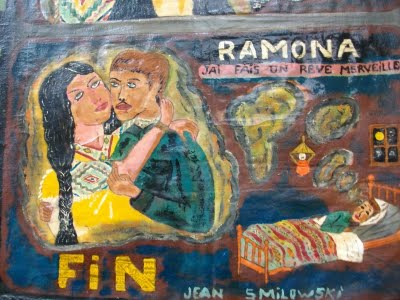 It is good to note that the authorities showed respect for the works. With Smilowski's assistance the walls with the frescoes were removed and put into safety before the house was broken down.

Smilowski moved to a house elsewhere in the city, where he lived for another four years. He died in 1989.

The paintings, models and the decorated walls have been preserved by the Association la Poterne in Lille, formed in 1993.

Documentation
* In 2012 an interesting study (for a large part available on Google Books) was published in France, which describes the way Smilowski's creation was discovered and how various actors in the public domain dealt with the artist and the artworks, comparing these developments with those around the discovery of the artworks created by Rémy Callot who lived in the city of Carvin, also located in northern France: